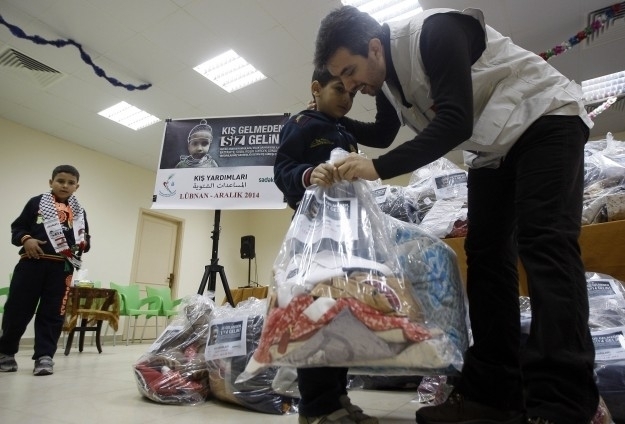 Two Turkish NGOs have provided winter aid to a large number of displaced Syrians living in Lebanon's eastern province of Bekaa, an area that is known for its harsh weather conditions in the winter.

A delegation from the two NGOs – Sadakatası Dernegi and the Association of Lebanese and Turkish Youth – has visited several villages in the Bekaa to check on the conditions of displaced Syrians amid extremely low weather temperatures and strong storms.

The delegation distributed "winter aid" to dozens of displaced Syrian and Turkmen families in the village of Durres, including blankets, shoes, clothes and fuel to be used for heating purposes.

"This is the first phase of winter aid for our Syrian brothers who are displaced in Lebanon," Sadakatası Dernegi head Kemal Ozdal told The Anadolu Agency.

"It is part of a major Turkish campaign to provide relief for Syrians, both the internally displaced and the refugees in neighboring countries," Ozdal said.

"Our visit to the Bekaa and distribution of aid on Syrian families is part of a campaign that included other Lebanese regions."

Head of the Association of Lebanese and Turkish Youth Zeina al-Emari, for her part, told AA that "children are the most needy when it comes to aid, since the biting cold can cause serious damage to their health."

"Our goals are purely humanitarian, away from any political leaning here or there," Emari said, urging other NGOs to "provide more aid in this critical time, as living conditions of the refugees in the Bekaa are severe and tragic."

The number of displaced Syrians in Lebanon has exceeded 1.2 million, according to the United Nations High Commissioner for Refugees.