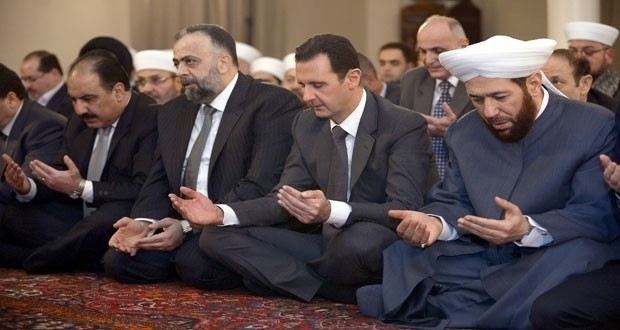 President Bashar al-Assad participated in a religious celebration of Prophet Mohammad’s birthday at al-Afram mosque in Damascus on Sunday.

In a speech to mark the occasion, Minister of Religious Endowments, Dr. Mohammad Abdel Sattar al-Sayyed said “the Prophet Mohammad and Islam are innocent from the acts of takfiri terrorist groups who kill, slaughter and conspire in the name of Islam.”

Minister Sayyed also paid tribute to the souls of the martyrs and soldiers of the Syrian army, adding that President Assad is leading the country to safety.

He also claimed that Islam called for “good deeds”, and banned the “sabotage of the Homeland” or the “forced evacuation of homes”, adding that Islam also banned the recruitment of child soldiers.