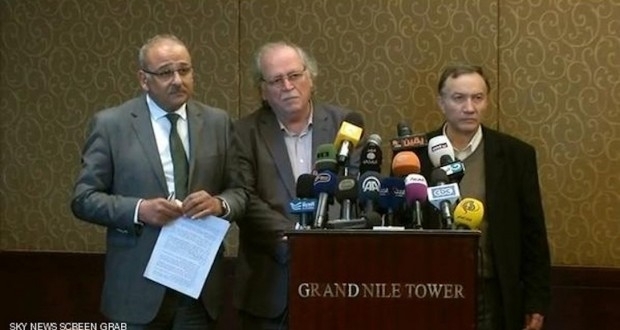 Syrian opposition members have met in Cairo, signing an agreement to mobilize opposition forces to restore democracy, claiming these forces are Syria’s only hope from the pests of tyranny, corruption and terrorism, according to the statement.

The statement draws on a vision and common “road map” reflective of the broader opposition, in order to unify efforts to revive a political solution through negotiations, according to the Geneva communiqué and relevant United Nations resolutions.

After examining some of the projects discussed by national forces and figures ahead of the meeting, attendees attempted to agree on basic commonalities between these projects – choosing a ground basis for a collective response to save the country. Attendees also agreed on the importance of taking practical steps on a unified basis to ensure a nationwide political option stemming from preserving the unity of Syrian land and its people, confirming its independence and sovereignty, and maintaining the institutions of the Syrian state.

The signatories agreed the goals could not be achieved without the implementation of the Geneva communiqué, especially the item concerning the formation of a transitional governing body with full powers. This transitional body will supervise the democratic transition process within a specific timeframe with international guarantees on the following 10 points:

1. The goal of any negotiation is the transition to a civilian and democratic system through a nationwide political solution.

2. The agreement of a social contract and national charter to establish a modern democratic state. A state that recognizes political freedoms and civil rights, adopts the principles of citizenship and equality between Syrians, gender equality, and ensures the full national rights of the Syrian people within a framework of decentralized administration.

3. Any realistic political solution requires a necessary international and regional cover, and a wide public acceptance, which requires a historic compromise embodying the aspirations of the Syrian people and their revolution. This compromise must be built on the basis of the Geneva communiqué with international guarantees.

4. The lack of union in the opposition's efforts was a negative factor and one of the reasons for the continuation of the conflict, hence, we see that the unity of the opposition is a national duty and demand.

5. The launch of the political process requires joint action from all the supporters of a political solution to: release all detainees and the kidnapped; respect international humanitarian law; cease war crimes, the bombing of civilians and depriving them of normal living conditions; allow food and pharmaceutical aid to reach besieged areas; remove the unjust economic sanctions that affect the lives of citizens; provide the necessary conditions for the return of the displaced.

6. All Syrian parties must agree to ending the various forms of a non-Syrian military presence (from any country or party), as the presence of non-Syrian fighters has caused the disaster to double in size, destroying the unity of the Syrian social fabric, depriving Syrians of the means to solve their problems.

7. A solution reached through negotiations would require all parties to abide by the principle of state-held weapons, requiring the restructure of military and security institutions, and the integration of opposition military forces in the political solution, with the assurance that these institutions will turn to protect the independence and sovereignty of the nation, and provide dignity and security for all Syrians.

8. International institutions should bear their legal responsibility to extinguish terrorism and its sources. Security Council resolutions on counter-terrorism (in particular resolutions Nos. 2170 and 2178) should be respected by all nations.

9. A political solution including radical democratic change – criminalizing violence and sectarianism – to awaken and mobilize Syrians in the fight against terrorist organizations inside Syria, threatening its present and future.

10. The preparation for a Syrian national conference to be held in Cairo next spring, and the formation of a committee to continue communication between Syrian opposition parties in preparation for the conference.