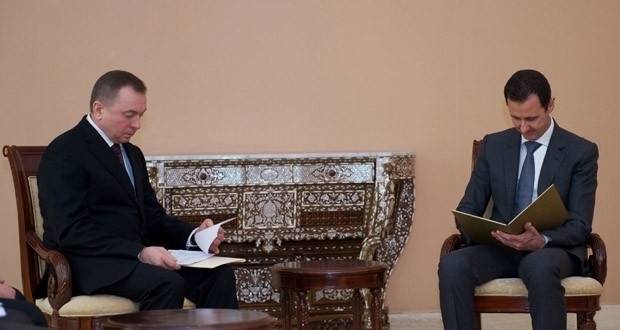 Makei delivered a letter to Assad from the President of Belarus, Alexander Lukashenko, in which he expressed his country’s support for Syria in the face of terrorist attacks targeting it, with Lukashenko expressing confidence in the Syrian people’s ability to achieve victory and overcome the crisis, asserting that Belarus is committed to developing relations with Syria in all fields.

During the meeting, Assad asserted that the terrorism, which is beginning to affect a number of countries, requires an international effort and strong will in order to deal with the crisis, affirming that Syria will continue its war on terrorism in parallel with carrying out national dialogue and reconciliations on the ground.

President Assad noted that a number of Western states are concerned when other states have independent decision-making, often pressuring them using various methods. This requires that independent states support and cooperate with each other to bolster their strength and realize their peoples’ will to preserve their sovereignty, preventing foreign interference in their internal affairs.

Makei said that Belarus supports the course taken by Syria for restoring security and stability to its territories, and that his country is committed to supporting the Syrian people.