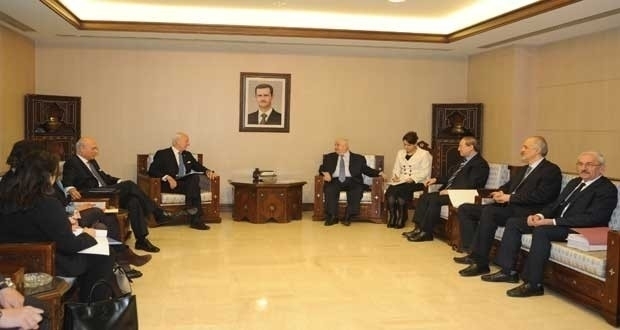 UN special envoy to Syria Staffan de Mistura discussed a new proposal for freezing the fighting in the city of Aleppo during a meeting with Deputy Prime Minister Walid al-Muallem in Damascus on Tuesday.


President Assad had said the initiative was worthy of study and that further work was needed to pursue its goals of restoring security to Aleppo.

Deputy PM Muallem also received the UN Envoy during the same visit, de Mistura’s second to Syria since his appointment in July.

At a press conference Monday, Muallem confirmed with his Belarusian counterpart that de Mistura’s initiative was focused on Aleppo city itself and not its countryside, making clear the UN envoy was welcomed because the Syrian government wished to implement an agreement to keep Aleppo stable and restore normal life to the city.