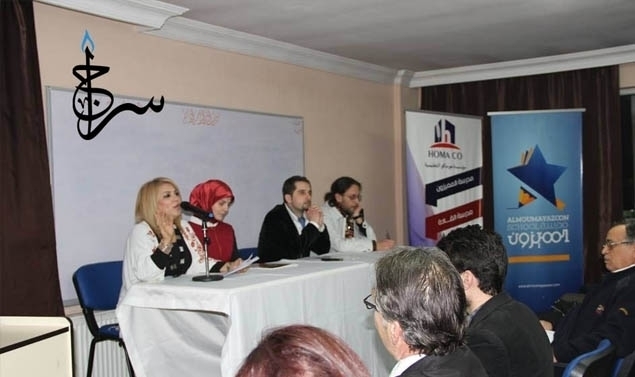 The Syrian Interim Government’s Department of Literature held a literary evening in the auditorium of al-Mutamayizoun school in the Turkish city of Gaziantep.

The event was hosted by poets Nour Mallah, Wajiha Abdul Rahman and Abdul Karim Baderkhan, along with writer Mustafa Taj al-Din al-Musa, who chose to read from two of his short stories.

Siraj Press interviewed the hosts to talk about their work and the evening.

When asked about the themes of her new work (I still believe in God … If you believe in dictators), poet Nour Mallah replied:

"Today's challenge is to hold your faith in the face of a wave of disbelief and atheism.

Many people do not hide, and do not fear criticizing God and prophets in public, without any regard for people's beliefs. The challenge is to remain a believer in God and a defender of faith.

Today's challenge is to hold your faith in the revolt against injustice and the unjust, whatever its color and affiliation was, and to remain faithful to your principles, to avoid falling as many fell.

The challenge is to remain a believer in love in order to face hatred".

“Most of the cultural activities in exile were individual, some of which were improvised, carried out by people who are interested in culture, but not professionals. We thank them and thank their efforts.

This evening was highly organized, and it was attended by a good audience – either in terms of quality or quantity. Frankly, I felt like I was back in Syria, meeting my friends and loved ones.

I read three poems in the evening, and was pleased with the public response, despite the pain that washes through our hearts.”

Wajiha Abdul Rahman, who also presented her poems in Arabic and Kurdish, said:

“The fact that the evening is the first activity of the Ministry of Culture of the interim government is a good sign, as writers have been marginalized and excluded from the Syrian revolution.

I was very happy because I read my poems in Kurdish and Arabic, I tried to say that the Kurdish language is the language of literature and life, and it deserves to be heard in parallel with the Arabic language”.

”I read two stories from my collection, Black Comedy, this evening, namely: ‘The Great Plan’ and ‘How Much They Are Nice’. The response from the audience was encouraging, and a rich discussion with the audience was held after the evening ended.

The evening was beautiful and successful due to the presence of a large number of writers and the audience, and the excellent organization by the Department of Literature and the staff of al-Mutamayizoun school.”