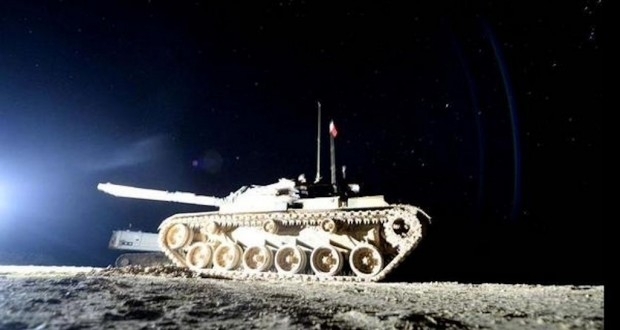 Turkey has crossed into Syrian territory to relocate the tomb of Suleyman Shah from the northeastern Raqqa province, in a suspicious act that reveals Ankara’s close connection with terrorist organizations operating in the area.

An official source at the Foreign and Expatriates Ministry said in a statement to SANA on Sunday that Turkey did not await Syrian consent to move the tomb after the Turkish Foreign Ministry informed Syria’s consulate in Istanbul of its intent to carry out the relocation on the eve of the operation.

Turkey carried out the move without Syria’s consent in violation of official procedures set in a 1921 agreement signed between Turkey and the French occupation authorities at the time.

The Foreign Ministry source described the Turkish move, which took place at dawn on Sunday, as no less that an act of aggression against Syria, dismissing it as “suspicious” because it unmasks the reality of Turkish intentions and Turkey’s relationship with the terrorist organizations of the Islamic State (ISIS).

“Turkey went far beyond providing all forms of support to its tools of the gangs of ISIS, Jabhat al-Nusra and other Al-Qaeda-linked terrorist organizations to carry out a blatant act of aggression on the Syrian territory,” said the source.

The sparing of the tomb by ISIS “confirms the deep connection between the Turkish government and this terrorist organization,” the source added, as the Islamic State has routinely destroyed mosques, churches and tombs in various areas across Syria.

The source concluded the statement by stating that the Turkish authorities, by breaching the aforementioned agreement, will be responsible for any possible repercussions of this aggression.