Ministries of economy and foreign trade will implement a number of measures to secure domestic production in an attempt to boost Syria's economy, minister says 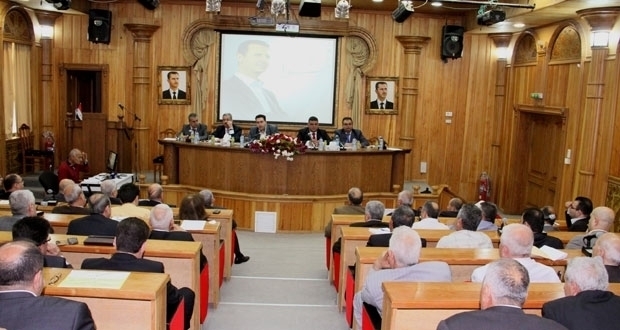 The increase of industrial and agricultural production for export is the most vital factor in securing the country’s exchange rate, Syria’s Minister for Economy Dr. Hammam al-Jazairi stressed at a meeting in the coastal city of Tartous.

Dr. Jazairi claimed the Ministry of Economy and Foreign Trade has taken significant steps at the level of foreign trade by granting full flexibility in the import of raw materials and supplies of production, permitting the extension of import licenses, while stressing the need to protect domestic agricultural and industrial production.

The minister said the Export and Development Promotion Agency will now support domestic production and exports in an attempt to reduce production costs, explaining the ministry’s current priority is to support livestock and private dairy production facilities.

"The port of Tartous, with its importance as a major Syrian transit point for export and import activities, is facing today a decline in comparison with the work of the ports of Beirut, Tripoli and Mersin," Dr. Jazairi revealed, pointing to the need to boost trade through the expansion of the port for the reception of larger ships.

The minister noted that Tartous, Lattakia and Suweida will soon see the creation of Exporter’s Federation branches as the provinces are currently eligible for export, calling on the chambers of commerce, industry and agriculture to assist in the marketing of products.