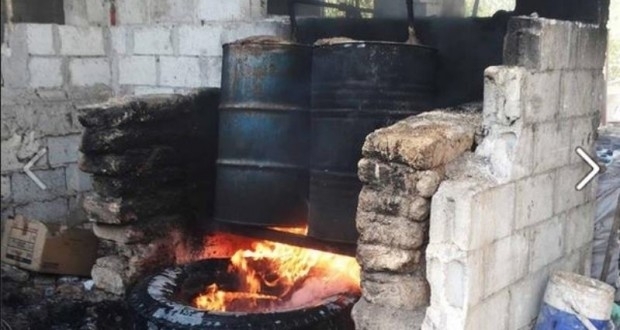 "Necessity is the mother of invention" is a familiar concept for Syrians whose spirit has failed to break from years of siege, with the lack of essential supplies sometimes leading to the development of new inventions and methods for coping with daily life.

The Assad regime has robbed Syrians of basic resources in besieged cities like Daraya, Moadamieh and Ghouta.

Deprivation of water is the most effective weapon of the siege, while residents of the besieged cities have lost their ability to secure bathing and drinking water, in addition to water for gardens – a major food resource.

Water outages have pushed people in the besieged areas to search for alternative ways to obtain water. A number of residents resorted to digging wells, but pumping water from the wells remains a major problem in the absence of energy resources like electricity and fuel.

The youth of Ghouta did not hesitate to search for a solution to this potentially lethal dilemma. Residents invented a way to draw water from wells by attaching bicycles to the pumps where children can peddle while helping to pump the water.

"This method may be useful for simple household needs", says eastern Ghouta resident Abu Rashid, "but agriculture requires larger quantities of water, in addition to a means of transport, which requires the provision of fuel which is not available in the besieged areas".

Syrians in the besieged areas have since dedicated their energy to securing fuel by melting down plastic to its raw components, as plastic contains high amounts of crude oil.

The people of eastern Ghouta prepared large barrels in pits to collect plastic waste from buildings destroyed by the regime, in addition to old shoes, plastic cans and other waste. After setting fire to the barrels, a long boiling process turns the plastics into liquid where oil can be easily separated from other materials through distillation. Steam then passes through water pipes to cool the product to create diesel.

With the success of this method, Ghouta’s residents have secured the necessary fuel to operate their cars and electric generators.