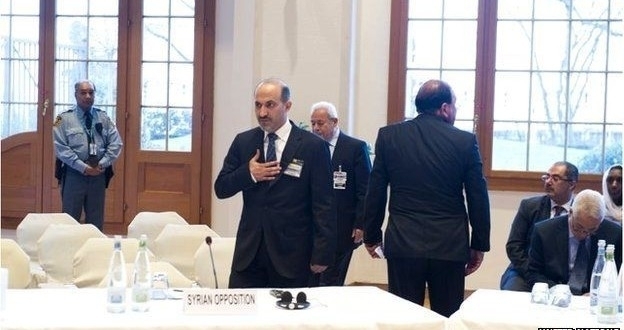 Former Syrian National Coalition president, Ahmad Jarba, stressed the importance of the Syrian opposition conference to be held in Riyadh, saying the event will be an important landmark in the history of Syria.

Speaking to reporters following a meeting with Secretary General of the Arab League Dr. Nabil al-Arabi, Jarba said: "The Syrian opposition will meet in Riyadh in the presence of the Arab League and other important countries in the region to agree on one document for the solution in Syria".

Concerning the specific demands of the Syrian opposition in Riyadh conference, Jarba said “there are no specific demands, but it will be a meeting of the opposition to agree on a document for a solution and a road map".  Jarba said his talks with the Secretary General of the Arab League are important under these circumstances in Syria, claiming the discussion dealt with all issues, notably the military situation on the ground and the change of the balance of power in favour of the rebels in Syria.

Speaking to a German news agency, Jarba said: “there are political talks in Geneva now, and we see that the change of balance of power on the ground in favor of the rebels encourages reaching a political solution that aims to end this deadly Syrian crisis, without the presence of Bashar al-Assad and his family".

In response to questions on the efforts by UN envoy Staffan de Mistura to hold the Geneva III conference, Jarba said: "there is no Geneva III so far, but De Mistura continues to conduct consultations and the Coalition did not and will not take part in these talks. De Mistura will be holding consultations over six months, but the Coalition does not see that there is a need to hold Geneva III, and does not see the benefit of dealing with De Mistura. If there is a need to hold the Geneva III conference, it should be on clear foundations".

Jarba added that Geneva III may be held after the Syrian opposition conference in Riyadh, but as to whether the Syrian opposition will accept a dialogue with the Syrian regime, Jarba said: "We sat in Geneva two years ago and the Syrian regime was present with the participation of 40 countries. We in the coalition agreed on the Geneva I conference, which is the only document agreed upon by the international community". Jarba stressed that President Bashar Assad has no role in Syria's future.