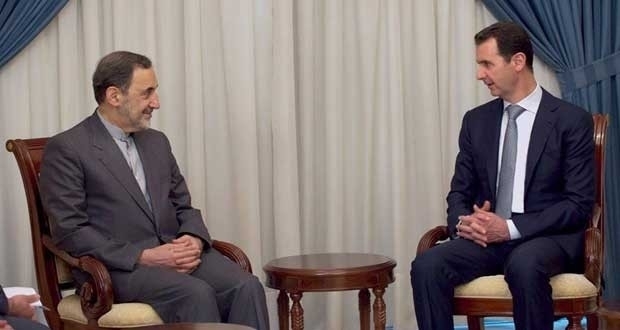 President Bashar al-Assad said on Tuesday the Axis of Resistance has been firmly established on the international level and can no longer be ignored by any party.

The key point made in favor of this axis was Tehran’s recent achievement in the Iranian nuclear talks, the President said during a meeting with Iran’s Advisor to the Supreme Leader, Ali Akbar Velayati, and an accompanying delegation.

In an attempt to respond to Iran’s success, some Western “client states” have escalated their support for terrorist forces in Syria, Iraq and Yemen, which explains the recent increase in terror acts, President Assad said.

The president hailed Iran’s support for the Syrian people, claiming the help has been fundamental in the battle against terrorism.

Velayati said sponsors of the international war waged against Syria seek to break the Axis of Resistance in which Syria stands central, claiming these efforts have failed due to the resilience of the Syrian people.

The Syrians peoples’ steadfastness, Velayati added, has strengthened the Axis, citing the recent “major victory” against terrorists in Qalamoun as evidence.

The Iranian official promised continued and unconditional support for Syrians as they continue to confront the terrorism targeting their homeland.

The meeting also stressed the importance of the strategic relationship between Damascus and Tehran, a main pillar in the resistance against Western plots, Wahhabi extremism and terror forces that seek to fragment the people of the region.

Speaking at a press conference after the talks, Velayati described the meeting with the President Assad as “fraternal”, “fully constructive” and “important” as it is necessary for the two sides, given their strategic relationship, to regularly exchange views and ideas.