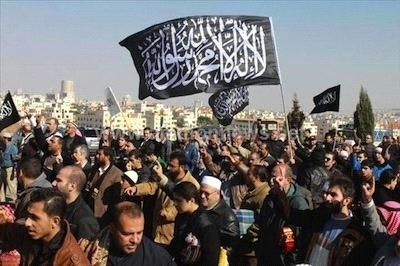 The Syrian branch of at-Tahrir (Liberation) Party, which calls for the establishment of an Islamic caliphate, held its first Syrian conference in the countryside of Idleb on Saturday.

The conference coincided with the 94th anniversary of the fall of the Ottoman Empire in the Turkish city of Istanbul in 1924, under the official slogan: "The revolution of the Levant is a revolution toward the establishment of the caliphate", according to the party’s social media accounts.  According to a press statement released by the party’s Information Office in Syria, the conference is to confirm to the world the demands of Syrian people in "establishing the Islamic caliphate, and their rejection of the civil state project".

According to Wikipedia, at-Tahrir Party is an Islamic political bloc calling for the re-establishment of an Islamic caliphate and the unification of all Muslims under its banner. The party is active in the political and media fields, with official party publications claiming it adopts political and intellectual activities as a way to avoid "physical actions" (such as armed actions) to achieve its goals.

At-Tahrir Party was founded in the Palestinian capital, Jerusalem, in 1953 by judge Taqi ad-Din an-Nabhani following the fall of the Islamic Ottoman Caliphate in Istanbul in 1924. The party’s political leadership is named the "Emirate" and is led by a “party Emir” – the duration of the party Emir’s leadership is unlimited and his "Emirate" is considered universal.