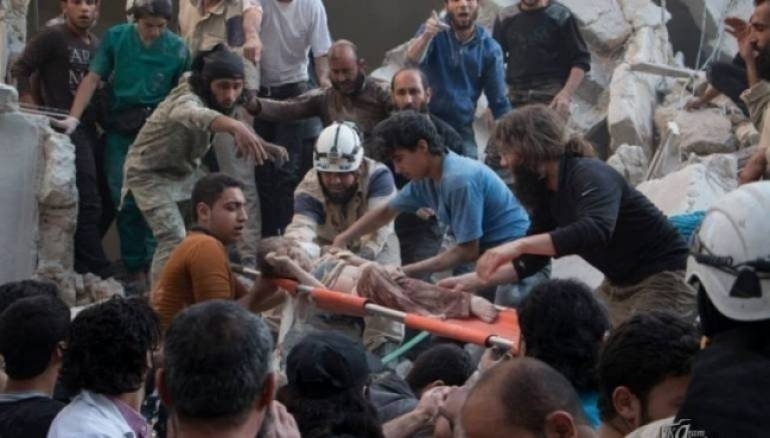 Syrian air raids on Saturday killed at least 136 civilians, including seven women and 14 children, as the government intensified its aerial campaign against rebel-held areas throughout Syria, mostly in in the northern province of Aleppo, the Syrian Network for Human Rights (SNHR) said.

An air raid targeting a market in the ISIS-held town of al-Bab killed at least 51 people using barrel bombs, steel drums full of shrapnel and explosives, the monitoring group said. Dozens of people were also wounded in the attack, according to the SNHR.

Al-Bab has been the focus of several heavy bombardments by regime forces since late last year.

A second regime air raid on the rebel-held al-Shaar neighborhood of Aleppo killed at least nine civilians on Saturday, the SNHR said. Al-Ferdous neighborhood was also targeted, killing at least nine people, according to the Network.

In northeast Syria, at least eight people were killed in an airstrike on the ISIS-held town of al-Shaddadi in Hassakeh province.

The United Nations special envoy for Syria Staffan de Mistura strongly condemned the bombings, saying it was "totally unacceptable that the Syrian air force attacks its own territory in an indiscriminate way, killing its own citizens, as it brutally happened today in Aleppo", adding that the “use of barrel bombs must stop”.