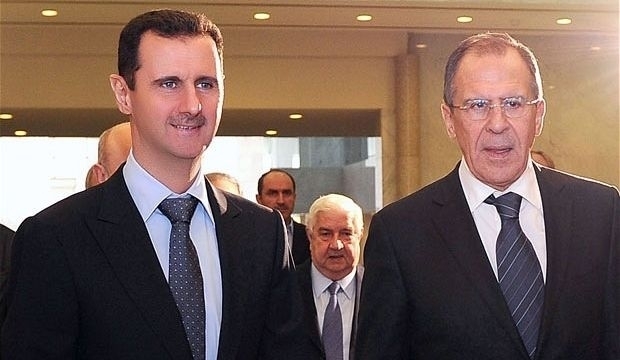 Clear signs are emerging of a dramatic U-turn in Russia’s policy towards the regime of Bashar Al-Assad, with Moscow even beginning to consider a “future without Assad” for the country, sources have told Asharq Al-Awsat.

Moscow, along with Tehran, is one of the main supporters of the Assad regime, but the sources say there has been a recent change in comments from Russian officials as well as other, more substantive, changes indicating a major shift in Russia’s relationship with the Syrian government.

Western diplomatic sources told Asharq Al-Awsat that during a recent and unpublicized high-level meeting of security officials aimed at tackling the threat of terrorist groups to international security, the representative of the Russian delegation was asked a question regarding Moscow’s view of the possibility of a Syria “after Assad.”

According to the sources, who have requested anonymity because they are not authorized to speak to the media, the representative said that “what concerns Russia is to safeguard its strategic interests and secure the future of minorities” in Syria, as well as ensuring the country remained united.

The sources said delegates at the meeting, which took place in a European city, were shocked by the statement, which would represent the first of its kind from a Russian official. Russia has frequently used its UN Security Council veto to block any international action against the Syrian president and his regime.

The sources added that upon hearing the comments from the Russian representative, some of the other delegates immediately left the room in order to telephone their superiors and inform them of what they had just heard.

Meanwhile, speaking to Asharq Al-Awsat on Saturday, sources from the Syrian opposition said Moscow had also recently transferred around 100 senior diplomatic and technical officials working in Syria back to Russia.

Many of them were working in the Damascus operations center providing support to Syrian security and military officials, alongside their Iranian counterparts and members of the Lebanese Shi’ite group Hezbollah.

The Syrian opposition sources, who requested anonymity in order to protect their identities, said the Russians left for Moscow on a plane via the Mediterranean coastal city of Latakia, accompanied by their families.

They added that Moscow had not sent replacements for them.

Members of the Syrian opposition who have been observing Hama airport, where, reportedly, Russian and Iranian planes often land to deliver military supplies for the Syrian army, have also not reported any Russian planes landing at the airport for three months, the sources said, adding that only Iranian planes had recently been delivering supplies.

The sources say the Kremlin is looking to boost economic ties with Gulf countries in light of European sanctions on Russia due to its involvement in the crisis in Ukraine—which have hurt the Russian economy during the past 12 months.

The Gulf states, including Saudi Arabia, the UAE and Qatar, are opposed to the Assad regime, and favor a democratic transition of power to an elected government as well as greater involvement for opposition groups in the political process.

Speaking to Asharq Al-Awsat, Riyadh Tabara, Lebanon’s former ambassador to the United States, said the apparent shift in Russia’s Syria policy is a result of the situation in the country becoming “out of control” and the gains made by extremist groups in the country during the past year.

According to the London-based Syrian Observatory for Human Rights, the extremist Islamic State of Iraq and Syria (ISIS) now controls some 50 percent of the country’s territory—though this estimate has not been accurately verified.

Tabara said Moscow and Washington have recently both been talking on a political solution in the country without Assad’s involvement.

“Moscow will be willing to concede [to a future without Assad] but only after receiving guarantees that the regime that will replace Assad’s will safeguard its interests in the country,” he said.

However, former Syrian deputy prime minister Qadri Jamil, who has been residing in Russia for the last two years, told Asharq Al-Awsat via telephone that he did not believe the recent comments and actions indicated a shift in Russian policy.

“What has changed is not the Russian position, but that of others . . . The Russian position has always been based on a political solution for the crisis in Syria without any preconditions. What has now changed is that others have begun to talk about a political solution, and we see several meetings and conferences held by the Syrian opposition to discuss this,” Jamil said.

“The Russians are neither with the Assad regime nor against it,” he added. “They deal with Syrian institutions and the state itself . . . in accordance with international law . . . The true Russian position has been distorted [by others].”

When asked, however, about how this claim sits with Russian military support for the Assad regime, he said: “The Russians have always said they are not supporting anyone in particular and that they want Syrians to decide on their own future . . . If the Russians had left things in Syria to progress without intervening [with military support] we would have seen in Syria today what we see in Libya. At least in Syria the state still exists and there remains a functioning standing army.”