Conference aims to formulate a proposal for a practical implementation of the Geneva statement and a clear vision for the future of Syria, Egypt's foreign minister says 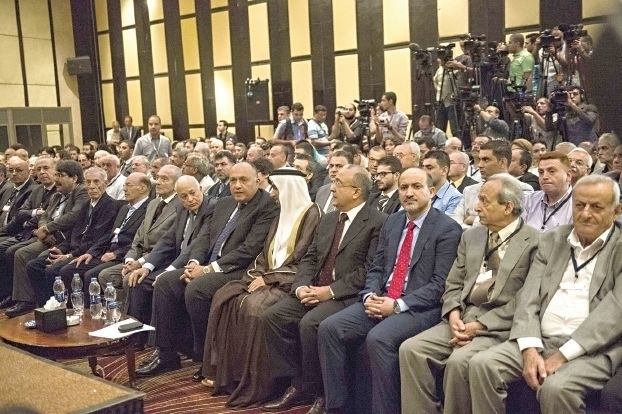 The Syrian opposition’s Cairo Conference is expected to issue a final statement on a projected road map and political solution for the implementation of the terms of the Geneva I conference, including a transitional governing body with full executive powers.

Conference participants seek the adoption of a Syrian national charter and the declaration of an action plan to implement the previous Cairo conference’s recommendations.

Egyptian Foreign Minister Sameh Shoukry spoke at the opening session yesterday, saying that the current conference aims to formulate a proposal based on the agreed-upon 10 points of the previous conference held in January, including a clear vision for the future of Syria and and a practical implementation of the Geneva statement.

This proposal, Shoukry added, would be presented to the Syrian people and the international community in order to reach a political solution. Shoukry explained efforts will not end with the convening of this conference, stating: "The discussions to be carried out today and tomorrow to form a plan to enforce a political solution is only the beginning, and we will work together to carry your message and your vision to Syria and the world". Shoukry stressed that the proposal will be open for all Syrian parties and factions to adopt, as "our efforts have always been based on the aspirations of all Syrian people; they were not confined to one party".

The opening session was attended by Secretary-General of the Arab League Nabil Elaraby and about 170 representatives from the Syrian opposition and the initial Cairo conference’s follow-up committee. Former Syrian National Coalition President Ahmed al-Jarba, General Coordinator of the Coordination Commission Hassan Abdul Azim, actor Jamal Suleiman, Haytham Manna and defected former-spokesperson for the Syrian Foreign Ministry Jihad Maqdisi were among the conference’s attendees.

Member of the Preparatory Committee for the Cairo Conference Saleh an-Nabawani explained in his speech that the meeting is an effort to: form a parliamentary, pluralistic and non-central democratic system; develop a program to create a climate for the historical political settlement, before and during negotiations; stop the armed conflict on all Syrian territory; obtain commitment from all international and regional parties to condemn the presence of non-Syrian fighters in Syria; and dry up their sources of funding and support".

Nabawani also pointed to the return of the displaced and all Syrian opposition figures to Syria without any security, legal or political accountability, the release of all detainees and abductees by all parties, as well as the abolition of all malicious provisions, including all terrorism courts and extraordinary courts formed since 2011.

Nabawani added that the conference will also discuss "the approval of a Syrian National Charter based on the 2012 Cairo Charter, which would be the reference of the constitutional principles in the transitional stage, a new constitution that adopts freedom, justice and peace based on equal partnership and civilian institutions independent from all the components and ideologies of the society".