Violations by terrorists and foreign states not mentioned in report by Commission of Inquiry, says Syrian ambassador to the UN 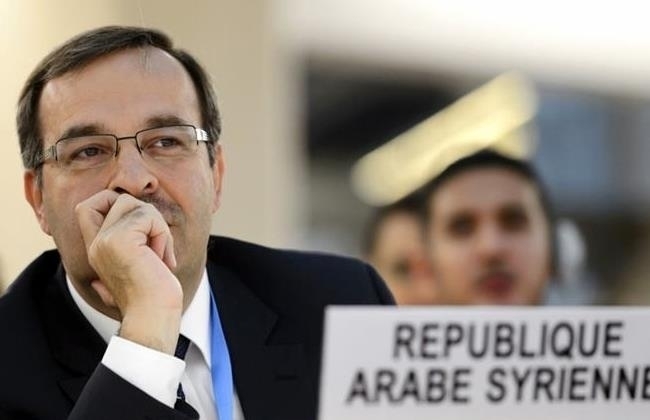 Syria’s Ambassador to the UN in Geneva, Hussam Eddin Ala, has said that the report released by the Independent International Commission of Inquiry on Syria is “biased” and its conclusions “are not based on professional or neutral data”.

Speaking at the 29th session of the Human Rights Council, ambassador Ala affirmed the period covered in the commission’s report witnessed intense shelling of mortars and rockets by terrorists on Damascus and Aleppo, claiming the lives of dozens of civilians including women and children.

The ambassador added that the same period also witnessed a number of massacres committed by the Nusra Front and ISIS in Ishtabraq, Qalb Louza and Palmyra, leaving hundreds of civilians killed or abducted. These crimes and massacres, Ala stated, were not included in the commission’s report, despite the fact that Syria had documented the incidents and referred them to the UN Commission and Human Rights Council.

“This deliberate disregard and negligence of information provided by the Syrian government on terrorists and their supporters indicates to the commission’s insistence on the approach it has adopted for the past four years; an approach that seeks a sole goal to distort and defame the Syrian state using fabricated information”, Ala said.

The Syrian official rejected accusations of the “deliberate shelling of civilians and institutions, including schools, hospitals and archaeological sites, while preventing refugees from receiving humanitarian aid” as politicized, affirming that logic and the situation on the ground refute such allegations.

“The commission has deliberately disregarded pointing to the International Human Law articles which ban the armed groups from taking havens in residential and populated areas,” Ala said, adding that the Commission should inspect the UN reports, including those by the Special Envoy on Human Rights, who stressed that armed groups are deliberately occupying populated areas to discredit the Syrian government.

“Contrary to the commission’s report, the Syrian government actually cooperated with the UNRWA (The United Nations Relief and Works Agency for Palestine Refugees in the Near East) and the Red Crescent to facilitate bringing out over 15,000 civilians from Yarmouk Camp after ISIS terrorists entered the area, the government evacuated the locals to safe areas and provided them with all basic needs”, the ambassador said.

Ala added that the report did not mention the names of states that support terrorism in Syria, namely Saudi Arabia, Qatar, Turkey, Jordan and other countries which are involved in the bloodshed.