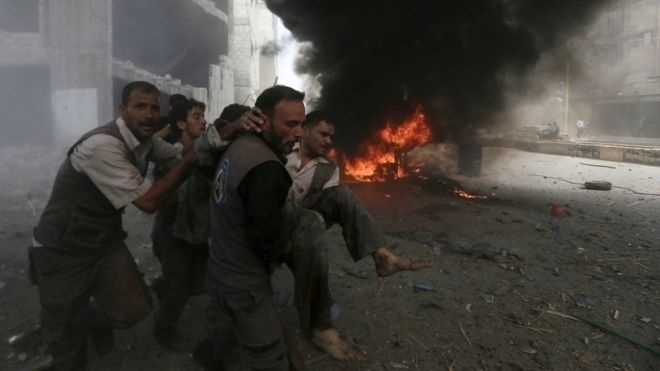 At least 300 more people were wounded in the attack on Douma, about 15 km northeast of Damascus, according to the UK-based Observatory and the local arm of Syrian Civil Defense, a rescue service operating in rebel-held areas.

Hussam Adnan, a volunteer doctor in the city's field hospital, wrote on his Facebook page the local hospital suffers from a shortage of medical equipment, adding that it is heartbreaking when medics find themselves powerless in front of pleas to rescue fatally injured victims.

A Syrian military source told Reuters that air force strikes on Douma and nearby Harasta targeted the headquarters of the Army of Islam rebel group. The Islamist group is reported to have conducted attacks on government positions in Harasta on Saturday.

A video released by the rebel group is said to reveal its leader, Zahran Alloush, taking part in the attack. The group is one of the most powerful insurgent factions operating near Damascus, the seat of President Bashar al-Assad's power, according to Reuters.

Another video bearing the symbol of the Syrian Civil Defense rescue service appeared to show dozens of bodies lined along the ground. Photos also showed civil defense workers wrapping bodies in white shrouds, while another video showed rescuers carrying bodies in a street strewn with vegetables and debris.