SNC calls three-day meeting in response to the UN envoy's plan, in an attempt "to give notes and ideas, and to put things into the right perspective,” says Coalition secretary-general 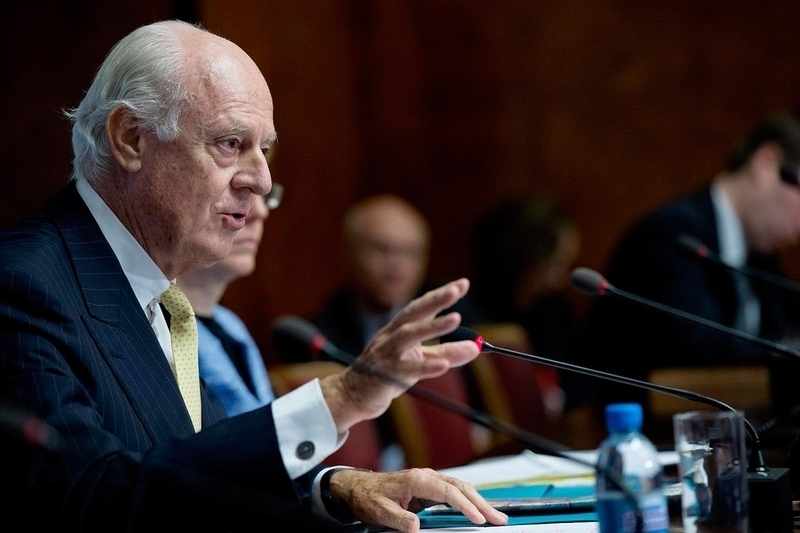 The General Assembly of the opposition Syrian National Coalition held a three-day emergency session to review United Nations special envoy for Syria Staffan de Mistura’s plan on a political solution to the crisis.

Although the Coalition does not seem to favor rejecting de Mistura's plan, it appears to be placed in a difficult position after the UN Security Council adopted it in its recent presidential statement. In response, the Coalition has “attempted to give notes and ideas, and to put things in the right perspective,” Secretary-General of the Coalition Yahya Maktabi said.

Maktabi added that the Coalition has fears regarding vague points in de Mistura's plan, specifically concerning the formation of a transitional governing body, the schedule of the transitional period, international guarantees and representation in the transitional body.

The Coalition discussed the ambiguities with the Friends of Syria Group, where the Political Committee summoned Coalition representatives based in the United States, Britain, France, the Netherlands, Turkey, Canada, Belgium and Spain, for consultations on de Mistura's plan.

The Coalition also discussed the plan with a number of opposition military factions and civil society organizations to reach a unified position in order to face the Assad regime’s delegation in the negotiations.

De Mistura's plan stipulates the formation of four groups: safety and protection, counter-terrorism, political and legal, and reconstruction. Each of these groups will provide a paper that will be used as a foundation for future negotiations in the context of Geneva III, to be held by the end of this year.

The Coalition fears de Mistura's plan will lead to the rise of powerful third parties – movements and civil organizations – with close ties to the regime.

According to some media sources, the Coalition is spearheading a special conference with the aim of unifying the opposition’s spectra on a political solution, and to discuss selection of the four groups to be chosen by de Mistura according to the nominations from the opposition and the regime. A source inside the Coalition has confirmed that the prospect of a special conference is not on the table, instead, the assembly would be no more than the typical consultations and meetings.

Sarah added that de Mistura's plan does not comply with the decisions of the meeting of Cairo II and its road map for a political solution in terms of objectives, methods and results. The member also stressed that the contribution of the Committee to support the UN envoy's plan will be limited.