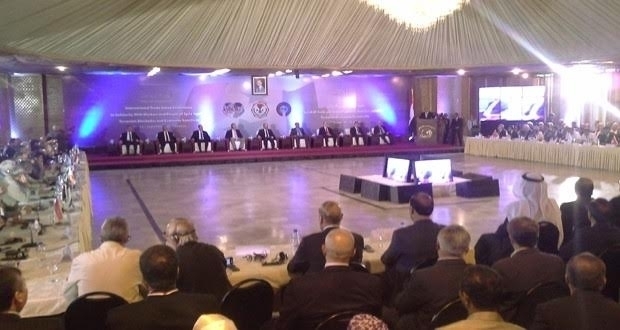 Under the patronage of President Bashar al-Assad, activities of the International Trade Union Conference (ITUC) in solidarity with workers and people of Syria against terrorism, blockades and economic sanctions kicked off Sunday at Sahara hotel in Damascus.

Speaking at the conference’s launch, Assistant Regional Secretary of Arab Socialist Baath Party Hilal al-Hilal said: “Holding the conference under the patronage of President al-Assad reflects the importance of bringing elite members of the trade unions together in Damascus, the beating heart of Arabism, and President Bashar al-Assad’s keenness on making this event a success.”

Hilal highlighted the importance of the conference which shows that the Syrian people are not facing terrorism alone, as they have been supported by the trade unions – qualified to play a significant role in achieving the political stability of societies.

The assistant secretary added that the Syrian people are today feeling abandoned in face of a danger that not only threatens them, but also threatens the entire world.

Hilal affirmed that the war launched against Syria is very different from other wars, as the war was launched by state-backed mercenary groups alongside an economic and media war, coupled with an unjust political, diplomatic, economic siege.

Hilal also said the current refugee crisis is a result of the war against Syria in which many European countries have participated, indicating that the biggest number of Syrian migrants have been displaced by terrorists.

“Europe’s approach to the refugees’ issue shows discrepancy between its economic interests and its racial feelings,” Hilal said, adding that despite of the fact that the European media focuses on Syrian refugees, the same statistics show that the Syrians represent only 25 percent of the total number of refugees.