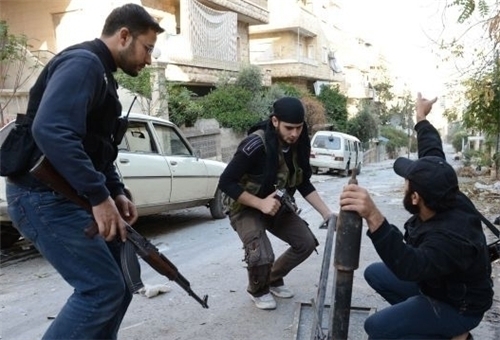 Syrian opposition factions managed to seize most of the buildings and divisions of women's prison in Adra on Saturday, September 12, while fighting around the prison continued for its third day.

According to Abu Mohammed ad-Doumani, a media activist from the city of Douma, the battle is the largest seen in eastern Ghouta for the past two years, adding that clashes continue to rock the district amid a large number of deaths among Assad's forces.

The activist stressed the battles in Dahiyat al-Assad are ongoing, and that 80 soldiers and officers from the regime's army have since been captured, while a large number of regime soldiers have been killed.

Ad-Doumini explained that the Army of Islam (Jaish al-Islam) and ar-Rahman Corps were able to advance on the outskirts of the women's prison in Adra, dominating most of its parts in the afternoon, stressing that the next stage is "crawling" toward the Central Prison of Adra. Opposition fighters seized heavy, medium and light weapons, missiles and anti-tanks in the Ghouta battles, according to the Information Office of the Army of Islam.

The Army of Islam, the largest opposition faction currently in Damascus, lost two of its embedded journalists, Anas Ghunaimah and Mohammed Abdul Karim Daghestani, in addition to the injury of the photographer and cameraman Amer ash-Shami, over the course of the fight on Saturday.