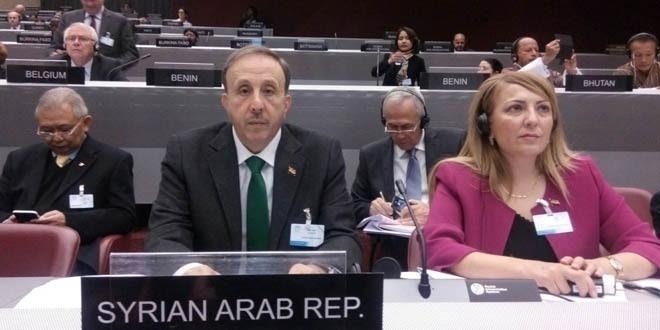 Speaker of the People’s Assembly Mohammad Jihad al-Laham said those who reject coordination with the Russian-Syrian alliance against terrorism are merely looking for an excuse to refrain from cooperating in the fight against terrorism, while also providing support to the Islamic State and Nusra Front.

Speaking at the 133rd Assembly of the Inter-Parliamentary Union (IPU), which commenced in Geneva on Saturday, Laham said that if countries are serious about fighting terrorism, they must follow Russia’s example and coordinate with the Syrian and Iraqi governments in order to eliminate terrorism before it spreads.

The diplomat said that while aerial operations are important, counter-terrorism requires ground forces to canvas areas, such as the Syrian army, the Iraqi army and other defense groups that coordinate with them, stressing that this cannot be done by training so-called “moderate” fighters in neighboring countries

“Everyone knows where those moderates ended up and where their American weapons ended up,” he added.

Laham said that the West’s policies which sought to destabilize Syria have begun to have negative repercussions on neighboring countries, as well as on Europe through the refugee crisis and the return of foreign fighters, adding that what is happening in Syria is a result of Western and Arab interference and their support to armed groups.