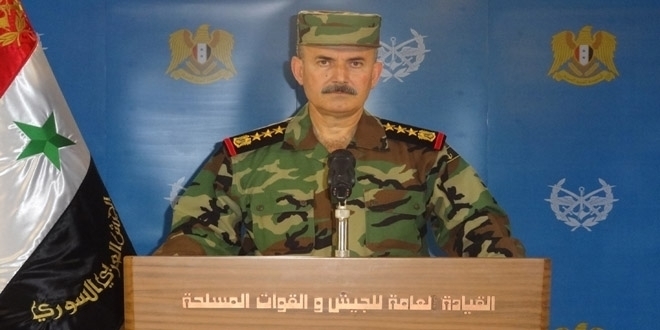 The Syrian army, supported by Syria’s air force, is continuing military operations against terrorist organizations in the central, northern, and southern areas, in addition to the northern countryside of Lattakia and Deir-ez-Zor, a spokesman for the army’s General Command told reporters on Monday.

According the spokesman, army and air force units continued their operations in Harasta and Nouleh farms in Eastern Ghouta, in the Damascus countryside, expanding their control over the areas, killing a number of terrorists and destroying weapons and ammunition stockpiles.

Other units continued operations in the direction of Jub al-Ahmar and Salma in the northern countryside of Lattakia province, establishing control over a number of hills and strategic areas in the region.

Army units also continued their operations in the southern countryside of Aleppo province, seizing over 50 villages, farms and strategic hills in an area exceeding 120 square kilometers, the spokesman said, adding that Syrian forces are continuing to hunt down fleeing terrorists, announcing that locals have been asked to return to Wadihi and Haddadeen after being declared safe.