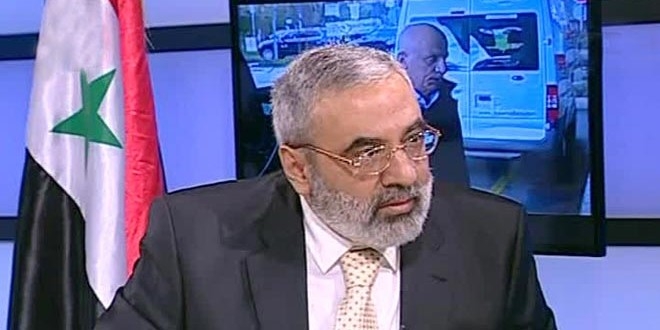 Information Minister Omran al-Zoubi said that progress in the political track requires reaching a consensus on the list of terrorist organizations, asserting that the only solution for the crisis in Syria is an intra-Syrian solution produced by national dialogue, without pressure from foreign sides.

In an interview with Syrian TV on Saturday, Zoubi said the opposition has little right to insist on improving Syria's humanitarian situation as a precondition to neogotiations, claiming that rebel forces had looted aid provided by the Syrian government in a number of areas and then ransomed it for 10 times its value.

The minister said the governments of Turkey and Saudi Arabia are “losing their cards in the region”, which will prompt them to commit political follies by seeking to raise their demands to achieve a political victory and cover up their faults regarding their own internal crises.

He also said the scale of hope riding on the current Geneva negotiations is linked to the Syrians’ experience at Geneva II, and that those who caused the second Geneva conference to fail are seeking to do the same at Geneva III.

Zoubi concluded by stating the majority of Syrians believe that the opposition abroad does not represent the Syrian people and their aspirations.