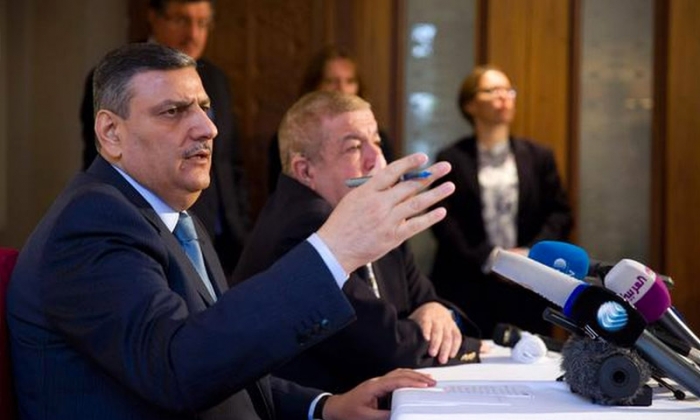 The general coordinator for the opposition High Negotiations Committee, Riyad Hijab, said that the solution for the crisis in Syria lies in neutralizing foreign influences represented by the “hostile” operations carried out by Russia and Iran and its allied militias, and in stopping the bombardment that Russian warplanes are carrying out on populated areas.

In comments on the sidelines of the Munich Security Conference on Sunday, February 14, Hijab stressed the need to fight terrorism in all forms, followed by the launch of a political transition process based on a pluralistic regime representing the full spectrum of the Syrian people without discrimination or exclusion.

This, according to Hijab, would occur by establishing a transitional governing body enjoying full executive powers, with no place for Bashar al-Assad “or his clique, who have sullied their hands with blood,” and by preserving the territorial integrity of Syria, while maintaining national institutions and reforming and restructuring its security and military institutions, as well as by creating a clear executive framework for accountability and transitional justice.

Hijab indicated that the High Negotiations Committee took a strategic decision to enter the political process and strengthen international efforts to achieve a political transition via negotiations sponsored by the United Nations.

He added: “All of you notice the cohesion the opposition has begun to enjoy today, and its ability to work jointly with a single vision for Syria’s future.”

Hijab explained the mechanisms which must be pursued to achieve peace in Syria: “An appropriate environment for the negotiations must be prepared, especially regarding ending the siege of blockaded cities and regions, empowering humanitarian agencies to bring aid to all those who need it, releasing all prisoners, especially women and children, stopping the bombardment of civilians and civilian targets, and stopping all abuses which the United Nations classified as war crimes.”

The general coordinator said that the “most effective” means of eliminating the Islamic State and other “extremist groups” begins with the departure of the Syrian regime, which “produced terrorism, and at the same time invokes it as a way to extend its stay in power.”