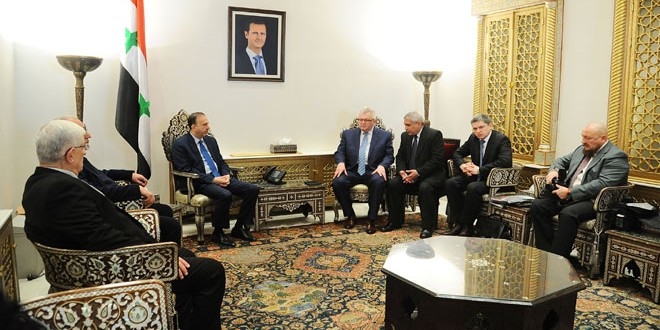 Speaker of the People’s Council Mohammad Jihad al-Laham on Tuesday stressed that Syria is open to all initiatives seeking a political solution to the crisis that wins the approval of all the Syrians, and not one imposed by Western powers and governments.

The comments came during a meeting with the First Secretary of the Central Committee of the Communist Party of Belarus, Karpenko Igor Vasilievic.

Laham affirmed that the current priority is fighting terrorism and launching the reconstruction process.

Laham noted that the Syrian army’s frequent victories against the terrorists are worrying those countries which support them, causing states to call for a ceasefire in an attempt to save the defeated insurgents.

He also referred to the standing economic cooperation between Belarus and Syria that has contributed to alleviating the Syrian people’s suffering.

Vasilievic, for his part, said the delegation’s visit to Syria is meant to express solidarity with the Syrian people and their leadership against the Western-backed terrorism inflicted upon the country.

He used the opportunity to stress the importance of boosting bilateral cooperation between Belarus and Syria and activating the joint parliamentary friendship association to coordinate its work at the various international forums.