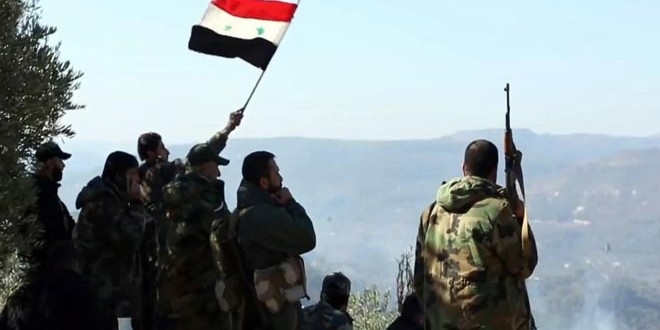 Army units in cooperation with popular defense groups on Thursday secured the town of Kenssaba in the northern countryside of Lattakia, a military source told SANA.

Earlier Wednesday, army units and defense groups established control over the southern side of the citadel, Sheir al-Qaboa, al-Amouli Mountain and Point 422, restoring security and stability to the villages of Marj al-Zawiyeh near Kansaba and the villages of Aidou and Qastal.

The army’s operations, which focused on Bajabjeh and Manshiyeh neighborhoods among other areas, resulted in the destruction of terrorist positions, vehicles, a mortar launcher and a machine gun site.

Army units captured the village of Sin in the eastern countryside of Aleppo after elminating the last remaining ISIS units in the area.

ISIS vehicles and fortifications were destroyed in Tal Arbash, 30 km east of Aleppo city, and in the villages of Qaroutiyeh, Zaalaneh and Treidem, 6 km north of Sfeira city.

Another army unit targeted terrorist hideouts in the town of Qabasin, located north of al-Bab city, destroying vehicles and weapons.

A number of terrorists were killed as their positions were hit by the army in Barqoum village, 27 km southwest of Aleppo city.

More terrorist sites were destroyed in army operations in Halak, Shqeif, Maaret al-Artiq and Yaqed al-Adas villages on the northern and northwestern outskirts of Aleppo city.

Around 74 ISIS militants were killed during army operations in the eastern Deir-ez-Zor province over the past 24 hours.

A ground source told SANA that an army unit killed 16 terrorists in Sinaa neighborhood in Deir-ez-Zor city, noting that most of those killed were foreigners.

Another army unit destroyed a vehicle transporting 13 terrorists at the Ghassan Abboud roundabout in the city.

All six members of a terrorist group also were killed when their hideout was hit in the Huweiqa neighborhood. The source confirmed that the group’s leader, who was Chechen, was among the dead.

At least 12 terrorists were killed and a mortar was destroyed in Hossan village, the western countryside of Deir-ez-Zor province.

According to the military source, an army unit killed 19 terrorists in the village of Jafra, east of Deir-ez-Zor city, adding that all of those killed were Chechen and Jordanian nationals.