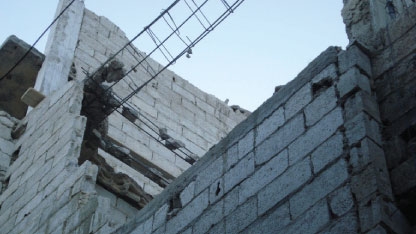 Major construction irregularities have spread through Hama, and perhaps in other Syrian provinces, like a cancer in the body. Administrative units have been unable to nip them in the bud, either out of complicity or fear of the major perpetrators, who consider themselves above the law and are exploiting the security conditions in a number of areas. These violations have become a living reality, and evidence of arrogance and violation of the law, and a flagrant example of the benefits and profits from position and capacities which the violators boast.

Most of these flagrant violations appear to be in the countryside of the Masyaf area, specifically on the Zeina-Heilein-Qadmous road, and to a lesser extent in the cities of Hama and Salmiyeh.

The reason for the growth of these violations, according to a source in both the Hama and Salmiyeh council, is due to a lack of power to confront the violators, even if support is ordered from the central demolition committee, which is headed by a deputy police commander. Violators have been known to object by directly threatening demolition workers in these administrative units with weapons.

This situation, and the growth of violations which influential figures are carrying out, has pushed officials in Hama province to address the head of the security council, especially regarding the violators who are encroaching on public property and forestry, and call upon the security agencies, internal security forces and military police to form a joint security force to support any administrative unit at the provincial level to remove the violations.

Hama’s governor, Ghassan Khalaf, headed a meeting of the central demolition committee and emphasized curbing the construction violations, whose owners and perpetrators are exploiting the current conditions in Syria, in order to preserve the authority of the state.

The committee, Khalaf said, needs to work as a single team, according to laws and systems, and closely pursue all building violators, even if it requires force, adding that it is a national duty to guard against violating state property, and doing harm to regulatory schemes.