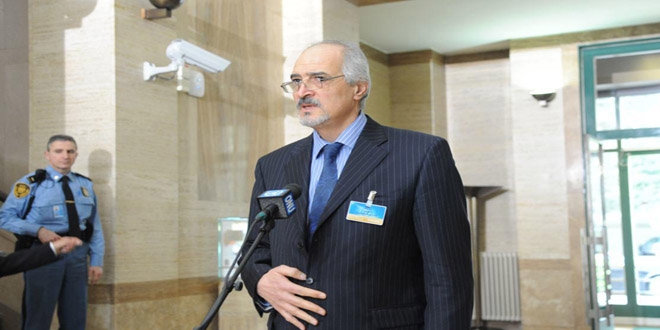 The Syrian government delegation to Geneva held a new session of talks with UN Special Envoy for Syria Staffan de Mistura at the United Nations headquarters on Wednesday.

Speaking to the press after the meeting, head of the government delegation Bashar al-Jaafari described the session as constructive and useful, adding that it discussed means to ensure the broadest representation of the Syrian opposition at the negotiations.

“We had in-depth discussions of the matter of the form and the need to give this issue enough importance in terms of ensuring the broadest representation of the Syrian opposition,” said Jaafari, adding that this has not yet been accomplished because some opposition delegates are yet to arrive in Geneva.

He stressed that, in accordance with Security Council resolutions, no single party has the right to claim to be the only representative of the opposition groups.

In response to a question on expanding the participation of opposition groups in the dialogue, Jaafari said that in line with previous Vienna statements and Security Council resolutions, the UN Envoy should invite the broadest spectrum of the opposition.

Jaafari stressed he will not engage in direct talks with terrorists, adding that the chief negotiator of the opposition Higher Negotiations Committee delegation is a member of a terrorist group responsible for shelling embassies and murdering innocent civilians including students at the Engineering Faculty in Damascus.