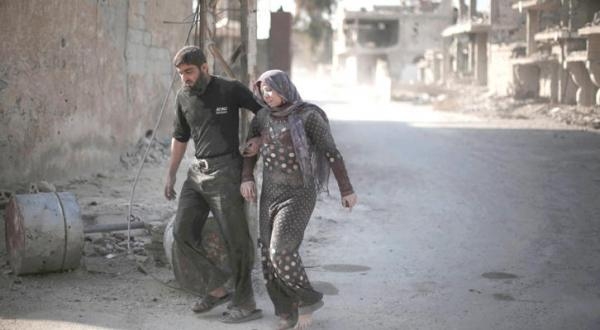 Days after the Russian declaration on withdrawing forces from Syria, Syrian President Bashar al-Assad threatened to end the ceasefire and resume the violent war launched against the Syrian opposition, should ongoing Geneva peace talks fail.

Media in Iran broadcast Assad’s words on Iran being considered the chief supporter for his regime ever since the Syrian revolution broke.

The Syrian Observatory for Human Rights and activists reported tens of killed Syrians after a series of airstrikes, on March 19th, pounded Raqqa city, located on the north bank of the Euphrates River. Meanwhile Damascus and Moscow raided, from the skies, ISIS strongholds.

The Syrian Observatory said that at least 39 people were killed and tens injured during the raid on Raqqa.

Iran continues to consider its military presence in Syria a mere advisory one. Yet Iranian forces currently trooping around in Syria comprise of the Iranian Revolutionary Guard Corps (IRGC), special IRGC unit Quds Force and militias employed by the Iranian administration.

All mentioned divisions of Iranian military forces are the elite of Iran’s armed national force, and IRGC websites had broadcasted their effective role in Syria which surpasses advisory limits.

Iranian former FM Kharazi confirmed Iranian support to the Assad administration, and then controversially added that no foreign countries should intervene in Syrian affairs.

“Current Geneva negotiations must take into consideration the people’s rights and the government’s legitimacy in Syria,” Kharazi said. He also declared that his country would refuse any other outcome at the negotiations.

With the truce entering its 22nd day, it is noteworthy that U.N. and the Syrian Arab Red Crescent (SARC) missions have delivered 34 aid convoys to the devastated town of Madaya. Three other aid trucks were dispatched to Zabadani city, located in southwestern Syria.

Humanitarian organizations were also able to have 24 aid trucks reach Fua and Kefraya, which are located in a region dominated by the Army of Conquest (Jaish al-Fatah).

The Army of Conquest fights along the ranks of the Syrian Opposition in Syria.