Syrian government delegation presents UN envoy with document outlining the “basic elements of a political solution in Syria,” but refuses to acknowledge discussion of a political transition or of UN resolution 2254 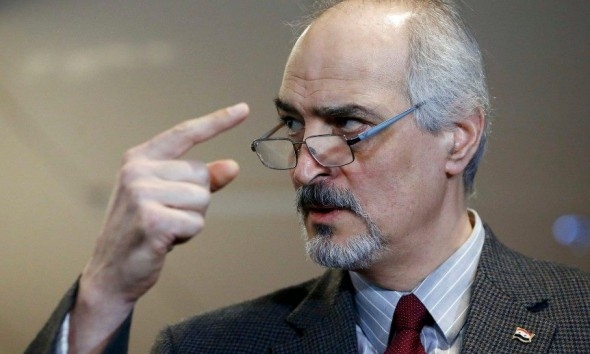 The Syrian government delegation in Geneva is adhering to a document, a copy of which was obtained by al-Hayat, which contains general principles including “the recovery of the Golan up to the June 4, 1967 line,” support for the Syrian army in “fighting terrorism,” ending neighboring countries’ “support of militants” – a reference to the armed opposition – and completely ignores discussion of a “political transition” or of international resolution 2254, which was sponsored by Russia and America. The delegation also asked to change the date of the upcoming round of Geneva negotiations because it coincides with the date of parliamentary elections on April 13.

The delegation told diplomatic and media circles close to it that it had not received two documents from the international envoy Staffan de Mistura on the “political transition” and the agenda for the talks, while de Mistura and his team are waiting for written responses from the government and opposition High Negotiations Committee delegations to dozens of questions about the “political transition”, its mechanisms and steps, and the relationship of the security agencies to the transitional authority.

During their meeting two days ago, the head of the government delegation, Dr. Bashar al-Jaafari delivered de Mistura a two-page document titled: “Basic elements of a political solution in the Syrian Arab Republic”. It had 10 items, including: “Respect for the sovereignty of Syria, its independence, the integrity of its territory, the unity of its land and people, the inadmissibility of giving up any piece of it, working to restore the occupied Syrian Golan up to the line of June 4, 1967, and rejecting direct or indirect foreign interference in the internal affairs of Syria in any shape or form, while Syrians alone will decide the future of their country by democratic means, through the ballot box, and hold the exclusive right to choose the form of their political system, far from any imposed formula which the Syrian people do not accept.”

The document also said that Syria was a “secular-democratic country built on political pluralism, the rule of law, the independence of the judiciary, and equality between citizens in rights and duties, defense of national unity and cultural diversity of Syrian society’s communities, and protecting general freedoms.” In addition to: “Fighting terrorism and renouncing intolerance and extremism and all takfiri ideologies, which is considered a national duty, and supporting the army and armed forces in operations against terrorism.”

The document called for “the international community to help in returning Syrian refugees to their country and working to prepare appropriate conditions for the return of the displaced.” And: “Canceling compulsive economic measures and other unilateral steps taken against the Syrian people and their institutions.” In addition to: “Calling for the convention of an international conference aimed at rebuilding Syria and establishing an international fund in this respect.”

The last points, which were in the seventh position, stressed, “preserving continuity of all the nation’s institutions and facilities and improving their performance, protecting infrastructure and public and private property,” which the opposition considered to be a tacit response to the opposition High Committee’s demand to “reform and restructure” the security institutions and the army and to “break up” some of them, especially those they consider “agencies of oppression.”

De Mistura urged Jaafari to present a document about the political transition along the lines of the High Committee’s document, instead of the 10 points, and to make a written response to dozens of questions presented to it and the High Committee delegation during his meetings with the two sides Monday and Tuesday. Diplomats and media close to the government delegation quoted Jaafari as denying he received any political document or questions from the international envoy. A Western diplomat said: “Jaafari is denying it to avoid acknowledging these documents.” But sources close to Jaafari said the delegation was put under “pressure from de Mistura contrary to his mission as an honest broker.”