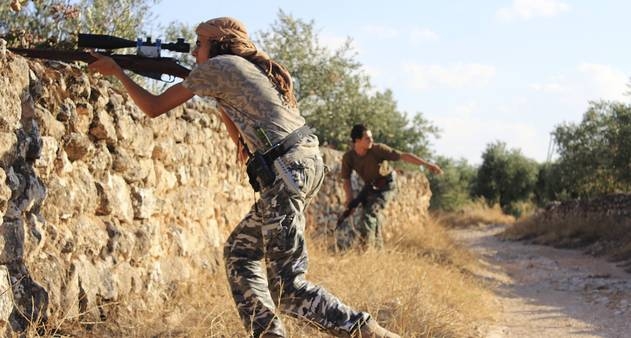 Hit-and-run battles are continuing between armed opposition factions and the Islamic State group in the northern Aleppo countryside, with the two sides exchanging control of villages and towns, and factions seizing a village only for ISIS to recapture using suicide bombers and car bombs.

Opposition fighters took control of the two towns of Tel Bataal and Ahmadiyeh and its farmlands after battles with the hardline Islamist group. Tel Bataal is one of the villages adjacent to the border, about seven kilometers from the strategic al-Raayeh city, which the opposition is trying to capture to tighten the noose around the organization in the northern countryside and open a new crossing between Turkey and the Aleppo from the same city. But ISIS militants managed to regain control of the city after using mines and car bombs.

Speaking to Al-Hal Al-Souri, Yasser Abou Sheikh (a leader in the Hamza Brigades, working in the northern Aleppo countryside against ISIS) said: “The reasons for the instability of the opposition forces in the villages and towns which ISIS has exited is twofold: First and most important is that ISIS is using explosives and suicide bombers, combined with the absence of advanced anti-armor weapons on our side and the weapons needed to confront them, namely a lack of support for the factions which would allow them to stand firm against ISIS’ explosives and suicide bombers.”

Abou Sheikh added that the second reason was “the absence of fighters in areas liberated from ISIS. During the operation to break into a town more than six factions with hundreds of fighters would gather, but after taking control of a village or two, only six fighters or a few more from each faction remained at points of confrontation with ISIS, which allowed the latter to retake the villages it had lost and send reinforcements from its special forces to take control.”

Abou Sheikh called for “supporters of the factions fighting ISIS to supply them with weapons like mines, because they are urgently needed to extend control over the broad areas of farmlands and homes,” adding that “a number of fighters from the rebel factions have been killed by these mines.”

Opposition forces have taken control of 10 villages since the start of the truce on February 28, although ISIS has managed to regain half of them by using car bombs and suicide bombers.