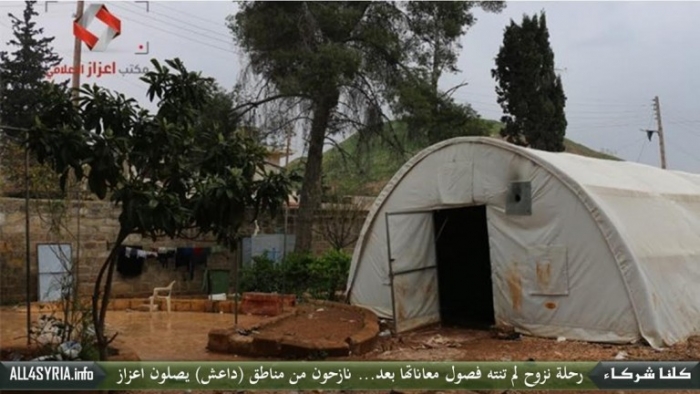 Dozens of displaced families from areas controlled by the Islamic State organization in the eastern Aleppo countryside, Raqqa and the Iraqi city of Mosul have arrived to the city of Azaz in the northern Aleppo countryside, hoping to find a safe place or crossing to enter Turkey, after a journey whose suffering did not end with their arrival to the city overwhelmed with displaced people.

Local activist Alaa Abou Omar told All4Syria that about 20 buses carrying families coming from areas controlled by ISIS arrived on March 21 to the city of Azaz, with some sleeping in mosques and others finding tents set up by the Syrian Red Crescent, and others sheltering in schools.

He added that most of the displaced are families with a large number of women and children, saying that among them were Iraqi families coming from the city of Mosul, which is also under ISIS control, in addition to families coming from Raqqa and the eastern Aleppo countryside. He said that most of the displaced were heading toward Turkey, but because the border was closed and it was dangerous to cross illegally – in addition to the large amount they have to pay to enter – they were forced to remain in the city.

Abu Omar said that the city of Azaz had been overwhelmed with refugees, with the number of people reaching about 500,000, while the number of original inhabitants is about 75,000. He said the city is increasingly overcrowded with the arrival of the newly displaced people, with about 100 to 150 people arriving to the city every day, all coming from areas controlled by ISIS.

Regarding the groups providing for the displaced and sheltering and feeding them, Abu Omar said that young men from the city had set up a shelter with support and funding from donors and town traders, but that this was still insufficient, adding that there was no designated authority to secure the needs of the displaced.