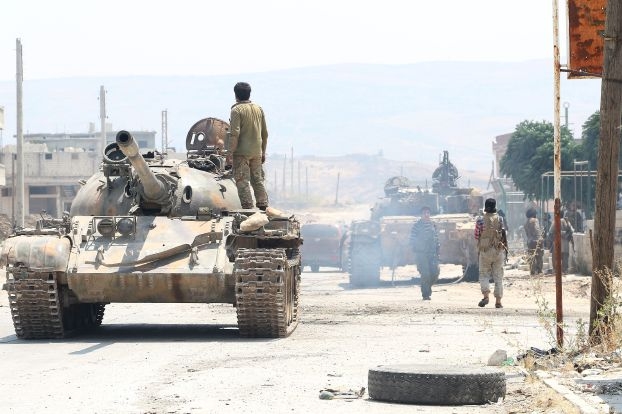 Syrian activists and civil society associations have appealed to end the siege on the city of Daraya, south-western Damascus, and other besieged areas days after the United Nations criticized the Syrian government for hindering the delivery of aid to blockaded areas.

A statement attributed to “the women of Daraya” distributed on social media said: “The Syrian tragedy continues, and scenes of violence and siege are repeated. Daraya is one of the areas hardest hit with shelling and destruction and a brutal siege for over three years continuously under the weight of a policy of starvation, with civilians alone paying the price.”

The statement said the area has witnessed the "impoverishment of all life’s necessities", from the simplest, like salt for food, to the most complex, like communication with others, especially after Daraya was shut off from Moadamiya al-Sham in the face of the civilians fleeing bombing and living in basements out of fear of shelling.

It continued: “After the truce which was finally achieved, calm returned to the city, but there is no one living outside their basements, because every building has suffered massive damage. We appeal to all those connected, far and wide, that we need immediate aid. There is no food at all in Daraya. There are cases of malnutrition.”

The statement called for “an end to the blockade from all sides on the city and the opening of roads and the delivery of all life’s necessities, including food, medicine, clean drinking water, clothes, shoes and soap.” In addition to “an appeal to the United Nations, all aid and humanitarian organizations, and concerned groups for immediate intervention and the delivery of humanitarian aid to affected people with the greatest possible speed.”

Jan Egeland, head of the UN working group for humanitarian aid, said on Thursday: “We have a new procedure now saying that after seven days we should get a permission to go to a place and then, within another three days, we should have the final clearance to actually go.”

According to that procedure, he said, “we had five convoys ready to go and for the last four days all of the five convoys could not go; 287,000 people therefore didn’t get the relief in hard-to-reach areas or in besieged areas.”

According to Egeland, “in the areas of Ar-Rastan, At-Tall, Bloudan and Kafr Batna, which is a besieged area, the final clearance letter did not arrive on the eve of the convoys leaving.”

Egeland said he believed the momentum of aid had slowed in recent days, adding: “we cannot fail, we must regain the momentum and I’m hopeful that that will happen in the next week or two.”