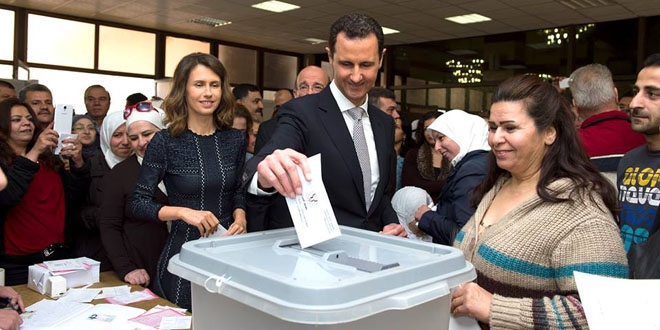 President Bashar al-Assad and Syrian first lady, Asma al-Assad, cast their vote Wednesday in the country’s parliamentary elections at a center in the Assad Library in Damascus.

Speaking to the press as he left the voting center, President Assad said: “the Syrian people are engaged in a war that has been going on for five years, through which terrorism managed to shed innocent blood and destroy much infrastructure, but it failed in achieving the primary goal it was assigned, which is destroying the principle structure in Syria, meaning the social structure of the national identity.”

Therefore, he said, “the terrorists’ backers moved in a parallel direction under a political headline whose main goal is to undermine this social structure and undermine the national identity, which are expressed by the constitution.”

According to the president, the elections saw wide-scale participation by all elements of society as the country witnessed an unprecedented turnout compared to previous parliamentary elections in Syria over the several past decades.

“It is natural to witness great enthusiasm among citizens, which is what we saw in the first years of these elections,” Assad added.