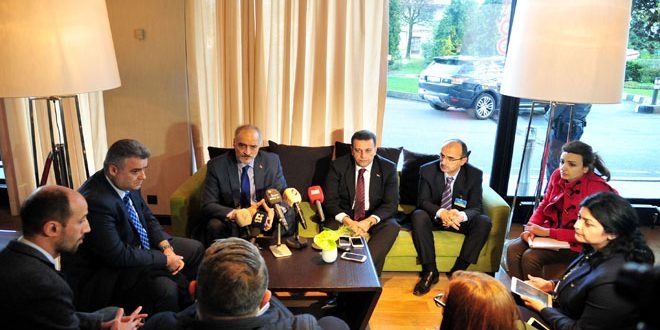 Head of the Syrian government delegation to the Geneva talks, Dr. Bashar al-Jaafari, stressed that the UN-led dialogue can continue with other opposition delegations even if the High Negotiations Committee group wishes to suspend its participation.

“There are several [opposition] groups that are present and support having the dialogue continue. However, those who want to walk away upon instructions they receive from the outside will have to take responsibility for their actions,” Jaafari told reporters, stressing that the government delegation is ready to go all the way with the dialogue.

Jaafari said that the United Nations, represented by its Special Envoy for Syria Staffan de Mistura, has not treated all factions of the Syrian opposition on an equal footing, citing this as one of the problematic structure-related issues spotted since the first round of the talks.

He went on to say that the formation of an expanded national unity government will include representatives of the current government, the opposition, independent figures and others, meaning a government of technocrats.

This concept, he added, has been explained to de Mistura, “with whom we engaged into active dialogue,” noting that the Syrian government is waiting for a response from other delegations regarding the amendments it made to de Mistura’s “Basic elements for a political solution” paper presented at the end of the previous round of talks.

“Our amendments to de Mistura’s paper are now the core of discussion,” Jaafari clarified, noting that the UN envoy has promised to put forth the amendments to the other groups and return with a response that will be presented during Wednesday’s session of talks.

Jaafari denied that de Mistura officially raised the issue of the “vice presidents,” stressing that he explained to the UN envoy that any such discussion is not acceptable as it is outside of his mandate.

He made clear that the opposition groups who want to be part of an expanded national government should not be linked to terrorism or follow foreign agendas and should be living in Syria, adding that the High Committee group is linked to Saudi Arabia, Turkey and Qatar.

Earlier in an interview with Reuters, Jaafari affirmed that talks in Geneva can be continued with other opposition powers although the High Committee delegation has announced suspension of its participation.

The opposition is not only restricted to the High Negotiations Committee, Jaafari told Reuters, adding: "If they want to boycott, they can boycott. It's not a big problem for us because they are not the only representatives of the Syrian opposition."