Documents include detailed information on over 300 fighters, a large number of whom are multilingual and boast previous military experience in numerous foreign armies 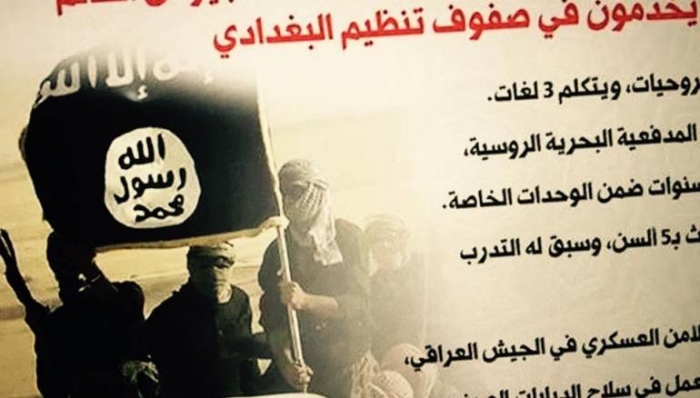 A new leaked document issued by the Islamic State group has revealed more personal data of hundreds of fighters who joined a military training camp during the month of Ramadan in June, 2014.

The electronic document, which includes detailed information regarding 368 fighters, outlines militants’ specializations, qualifications, their general and military experience, and the languages they speak.

The document, entitled “Camp Database,” is part of a massive archive on ISIS obtained by Zaman al-Wasl, and paints ISIS as a gigantic universal corporation that traverses borders, drawing its “employees” from various countries and different work domains to merge them in one entity, the “Caliphate.”

The leaked file reveals that around 30 percent of the members listed in the document had prior fighting experience, which most gained by serving in national armies, through their prior presence in factions active in Syria, or through fighting experiences in different countries, including Libya, Afghanistan and Pakistan.

In addition to seemingly ordinary specialties, such as trading, truck driving, sewing, cooking, other fields draw greater attention, such as those of Norwegian Abu Amir al-Russi, an expert helicopter pilot and sniper. A note in Abu Amir’s “General Experience and Languages” category reads that the member speaks English, Russian, Norwegian and some Arabic.

Other fighters have experience in the armed forces of China, Iraq, Russian, Saudi Arabia and have served in the ranks of NATO, while 26-year-old militant Saif Allah was shaped by his experience in Russian organized crime prior to joining ISIS.

In the field of languages, a large number of the fighters who joined the camp are competent in two languages or more.

The files also state that Laith Abu Jihad al-Tunisi, who lived in Canada for three years, specializes in electromechanical engineering, having studied and trained as an airplane mechanic for 11 months and is a master of various martial arts. The document also notes that Laith speaks five languages, including French, English, Spanish, German and Russian.

According to the documents, Abu Hamzeh al-Tamimi, a Tunisian who joined the ISIS military training camp during Ramadan, holds a masters in administrative science and speaks French, German and English.

The electronic document also confirms that Abu al-Yasaa, who lived in Canada for 13 years, studied psychology, while member Abu Musa al-Kanadi worked as a chemical engineer – a vital specialization for ISIS and its activities.

Some of the militants whose data is included in the document specialize in a number of different sports, with member Mohammad from Kyrgyzstan holding a black belt in Taekwondo.

According to the document, German professional kickboxer Abu Jihad has reached an advanced sporting level, adding that member Abu Abdullah holds the championship title for karate in Tatarstan (Russia).