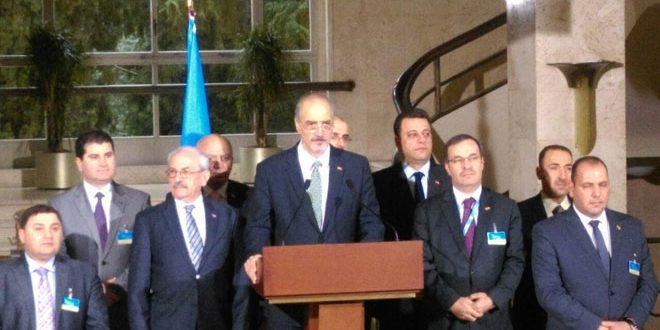 Head of the delegation Dr. Bashar al-Jaafari announced in a statement to reporters after the meeting that the Syrian government delegation engaged in a responsible and objective manner in every discussion that could serve Syria and its people, answering all questions and inquiries posed by the UN team.

The delegation, Dr. Jaafari said, “raised plenty of important points, especially regarding terrorism,” adding that the team sensed an understanding on behalf of de Mistura regarding Syria’s concern for state-sponsored terrorism that seeks to undermine political efforts through breaching the cessation of hostilities agreement.

Dr. Jaafari described the third round of talks as “useful and constructive,” pointing out that the Syrian government delegation will leave Geneva on Wednesday, according to the schedule agreed on in advance with the UN.