Assad regime reportedly struck a deal with Islamic State in order to swiftly retake Palmyra from the hard-line group back in March, leaked documents reveal 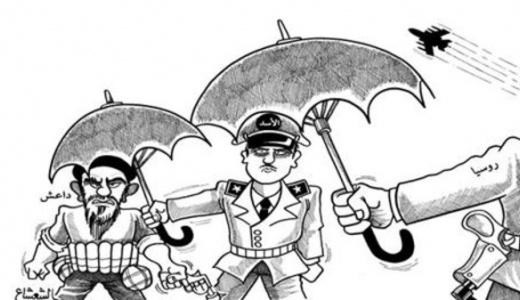 The Assad regime’s recovery of the ancient city of Palmyra from the so-called Islamic State was part of a secret agreement previously arranged between Damascus and group, which allowed ISIS to move its heavy weapons from the city before withdrawing, according to a report by Britain’s Sky News television channel quoting secret documents it obtained from ISIS defectors.

Sky also referenced an earlier document for the regime’s army to retake the city in March, in which ISIS asks to withdraw all its heavy weapons, machine guns and anti-aircraft weapons from inside and outside Palmyra to Raqqa province in northern Syria. The transfer was, as proven by facts on the ground, secure for ISIS weapons and fighters alike.

Stuart Ramsay, the Sky News correspondent who prepared the report, said that he asked one of the defectors if ISIS was coordinating its movements directly with Assad loyalist forces or even with Russia, which supported the regime with warplanes, in the attack Syrian forces carried out to “easily” retake the city. The defected ISIS member responded to the question with one word: Definitely.

Sky reported that ISIS delivered Palmyra to pro-regime forces, in one of the cooperation deals ongoing between the two sides for years, and which include the purchase of oil for agricultural fertilizer, and the evacuation of some areas by the group’s forces before attacks by Assad’s army, all through direct communications between the leadership of the regime and the organization.

The leaked documents revealed that ISIS has trained foreign fighters to attack Western targets for a period much longer than was thought by security agencies.

Ramsay obtained the information published in his televised report through direct communications with groups from the Free Syrian Army who were active in Raqqa and are now concentrated along the border with Turkey, undertaking from there the smuggling of ISIS defectors and distancing them geographically from the areas they control, among them those who reported the information about the existence of a “trade agreement between the two sides that has been going on for years.”