In statement to UN chief, top opposition figure says that the regime and its allies have commenced a campaign against civilians in liberated Aleppo and Idleb 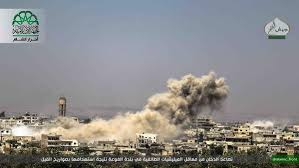 With an increase in regime massacres on opposition-held areas and the approach of the Holy Month of Ramadan, General Coordinator of the opposition High Negotiations Committee Riad Hijab wrote to UN Secretary General Ban Ki-moon to inform him of developments regarding the truce and the devastating air strikes waged by the regime and the Russian air forces.

In his letter to Ban, Hijab said: "I am saddened to report the worrying news regarding the intense campaign Assad regime has launched against Aleppo, Idleb, the Damascus countryside, Daraa and all of Syria, backed by the Iranians and the Russians."

He added, "The Russian air forces, the regime's forces and the Iranians have launched a campaign against the civilians in Aleppo and Idleb that has left scores of people dead, most of which are women and children, and over 250 injured. The number of martyrs is increasing, as most injuries are critical. Hospitals and schools in particular are being targeted, so that the sick who are admitted for treatment to be saved are being killed."