Economic team implemented measures to reduce prices in the lead up to forming a new government, official says 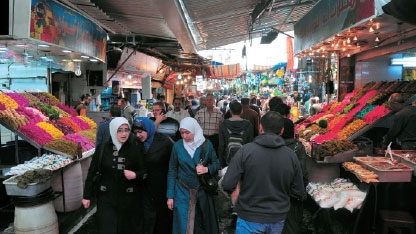 An official from the Ministry of Economy and Trade has described the fall of the dollar against the Syrian pound as a satisfying yet cautious event as many fear a sudden price increase.

Manar al-Jallad, board member of the Damascus chamber of commerce, said that an economic team implemented certain measures to bring prices down in an attempt to create favorable economic circumstances in the lead up to forming a new government.

The official said that the most important factor of the price change was extending the pledge to return the export currency, which does not suit the current economic environment. He explained that extending the return of the export currency for three months has placed a lot of pressure on Syria’s black market economy as exporters began to deal in the dollar. Additionally, exporters will avoid keeping their dollars abroad as it is in their interest to import them to the local market to cover expenses and financial obligations, like salaries and transport fees.

Jallad added that the hidden interference of Syria’s Central Bank inside the exchange market has helped improve the power of the local currency, adding that the third procedure the government and the stakeholders must undertake is stabilizing the prices of funding imports of fundamental supplies.