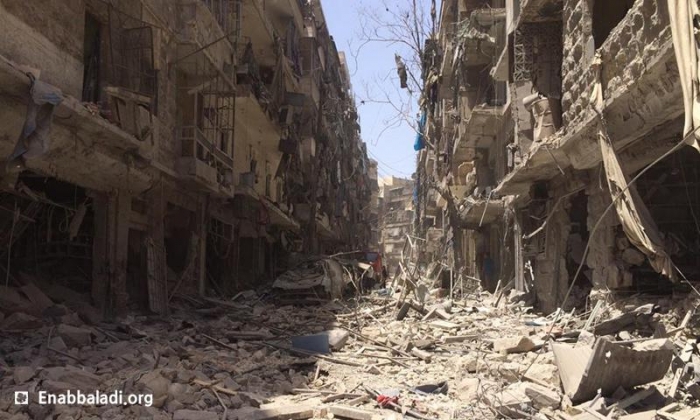 At least 10 people were killed and others were injured during regime air raids against Aleppo city and its countryside on Monday, June 6, the first day of Ramadan.

The Aleppo Media Center reported that three civilians were killed and a number of others were wounded during the raids in the Jisr al-Haj district of the city.

Three more civilians were also killed in similar raids in the Marjih neighborhood. Other raids targeted Qadi Askar and the Sakhour neighborhoods, meanwhile barrel bombs were dropped over the Masaken Hanano neighborhood.

The Aleppo Conquest joint operations room, which comprises a number of rebel factions, issued a statement urging locals to abolish "Tarawih" (night prayers) in the neighborhoods that are controlled by the opposition due to the continuous attacks targeting these areas.

They also called for more pressure on the Assad regime and the international community to find a solution for the Syrian crisis and to reactivate the truce that was previously administered in Aleppo, especially during the holy month of Ramadan.

Since the beginning of May the city has witnessed an unprecedented escalation of military conflict, resulting in dozens of massacres in opposition-held neighborhoods. At the same time, random mortar fire has also killed many civilians in neighborhoods controlled by the Assad regime.