Three-year blockade has caused prices of basic goods to spike with sugar reaching around 20,000 SYP a kilogram, sources claim 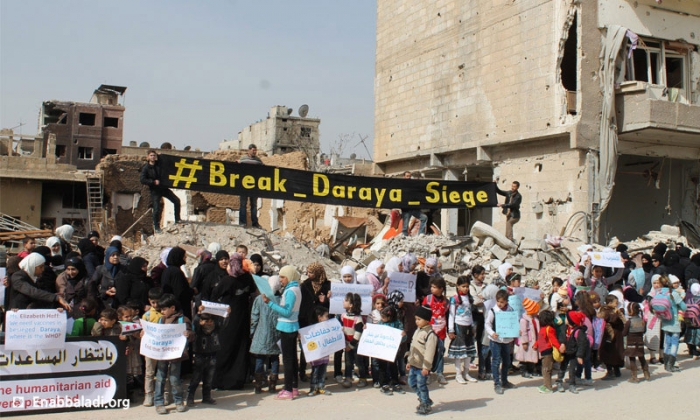 Daraya in Eastern Ghouta has suffered from the loss many necessities due to the siege imposed by the Syrian regime for three years. The blockade has affected all means of trading products in the city, with a number of local merchants monopolizing on rare goods and selling them at high prices, according to Enab Baladi’s correspondent.

The price of one kilogram of sugar has reached almost 20,000 Syrian pounds ($90), while the price of a pack of cigarettes has exceeded 10,000 pounds.

The average salary for a worker in Syria’s public sector averages around 25,000 Syrian pounds, however in Daraya, which lies 8 kilometers from the capital Damascus, there are no opportunities for employment.

The regime also targeted the farmlands which provide basic food for the besieged civilians leading to a sharp increase in the prices of vegetables, with the price of lettuce reaching about 500 pounds.

An aid convoy of nine trucks carrying 480 food baskets entered the city last Thursday, June 9. The aid is estimated to support 2,400 people for around a month, however about 8,000 people are believed to be residing in besieged Daraya, according to the local city council.