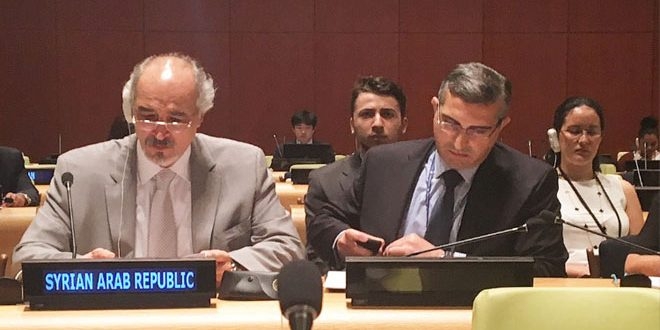 Syria renewed its call Monday for the United Nations to guarantee terrorist organizations active in Syria and across the world will not obtain weapons of mass destruction.

Syrian envoy Bashar al-Jaafari told a UN committee that Syria is witnessing serious violations of the chemical and biological weapons act, as terrorist groups have employed chemical weapons a number of times against civilians and military personnel with the support of regional governments and intelligence agencies.

“There are still significant gaps utilized by terrorists for obtaining weapons of mass destruction as to use them in their criminal targets,” he said before the committee.

Jaafari pointed to the direct involvement of some UN member states in supplying terrorist groups with chemical weapons or materials for their production.

The envoy clarified that on June 13 terrorist groups positioned in the area of Hosh al-Fara fired a homemade rocket containing chemical substances on a Syrian Army unit, injuring five of the soldiers who were later hospitalized.

Jaafari claimed that terrorist groups had received sarin gas though the Turkish territories after transferring it on a passenger plane from Libya to Turkey. He said Damascus had provided the UN with proof that these groups possess chemical weapons, adding that the armed factions intend to use the gas in several areas in the country while accusing the Syrian government of the violations.