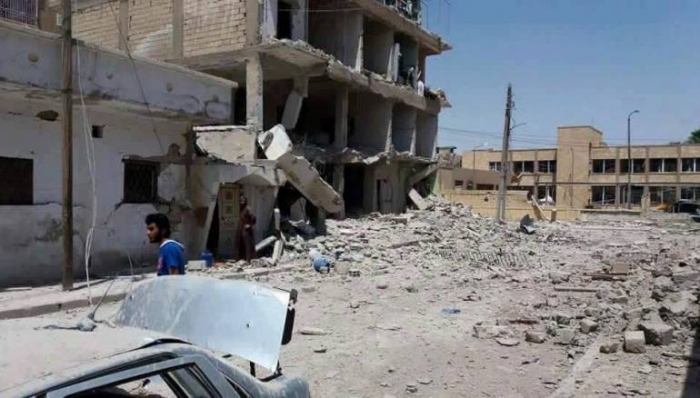 Russia's air strikes on the Islamic State-held city of Raqqa killed 18 civilians and wounded 20 others on Tuesday, a local monitoring group said.

Raqqa is Being Slaughtered Silently campaign said on Wednesday that the death toll from Russian strikes rose to 18 after 10 people were killed immediately in the attacks.

So far, Moscow has not claimed the responsibility for the raids.

In northern Aleppo, the US-led coalition against ISIS said Wednesday it was tightening the noose around militants in the city of Manbij near the Turkish border but expected them to fight to the end to defend their stronghold, Reuters reported.

"We're around the city and we're coming in, and we've cut the lines of communication into it and the noose is getting tighter around the city," Baghdad-based US Army Colonel Chris Garver told reporters, adding: "We are anticipating that that's going to be another good fight when we get in there."

"We've anticipated that they (ISIS) would hold Manbij till the last, that it would be one of those places that they defended till the end and we have not seen anything that's going to change that assessment right now," Garver said.

A statement from the alliance on Tuesday said they had thwarted an ISIS counter-attack outside Manbij which included the use of vehicles laden with explosives.

The Syria Democratic Forces (SDF), a US-backed alliance of Kurdish and Arab fighters supported by coalition air strikes cut off the group's supply lines to Manbij in a rapid advance this month against ISIS in the area.

The offensive aims to sever the group's only major route to the outside world.

But it has stopped short of an assault on the city itself out of concern for civilians inside, the US-backed alliance said.

The UK-based Syrian Observatory for Human Rights says scores of ISIS fighters and dozens of SDF fighters have been killed in the three-week offensive.

The US-led coalition says at least 20 fighters from the Arab contingent of the SDF have died in fighting.

The Observatory said more than 3,000 civilians have fled Manbij during the fighting, and that clashes continue in the countryside around the city.