Top prosecutor in the Damascus countryside says many beggars who are arrested claim to have false impairments, especially the children 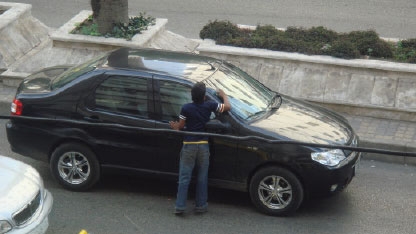 The attorney general for the Damascus countryside, Maher al-Albi, said that most cases of begging considered by the judiciary are children who have not reached the legal age, while sources following the issue said that cases of begging during the holy month of Ramadan have risen sharply, especially among women and children.

In comments to Al-Watan, Albi said that the cases seen by the judiciary are fewer than those received in Damascus city because of the number of public areas, such as gardens and roads, under the city’s jurisdiction. He added that many of the beggars who are arrested claim to have false impairments, especially the children.

Albi said there were many ways the beggars operate, adding that among them are are highly proficient fraudsters, which is why the law considers begging a crime.

Albi said that underage children who have been arrested are transferred to a magistrate’s room for individual review, while adults are transferred to a magistrate criminal court, adding that the punishment is increased in the event of a repeat offender. Sources following the issue said that many have been taking advantage of the month of Ramadan to beg, in order to reap a higher amount of money, adding that most stand at the doors of mosques to obtain food and other handouts. They noted that most of them are able to work, while some carry false medical papers claiming they are ill or suffering from a specific ailment.

The sources said that there were many cases of arrests and transfers to court during the past few days, adding that the number of women and children beggars had risen sharply during the month of Ramadan to the extent that there were more than five beggars at every mosque door at every prayer time, and that this had not happened previously. The sources said that a new phenomenon had occurred and that some girls whose ages range between 18 and 23 were selling tobacco at stalls, adding that this type of issue had not been widespread in the streets.

The sources called on the Ministry of Social Affairs to carry out its real duty to fight the phenomenon of begging, especially during Ramadan, since the rate has risen sharply in recent weeks.

The ministry said in comments to the media that the it had made a comprehensive program to eliminate the phenomenon of begging, since the rate of begging has clearly risen throughout the crisis.