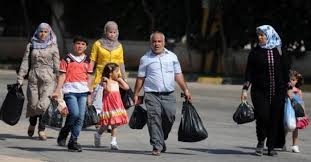 The head of the Damascus Sharia Court announced that the number of requests to approve travel for minors fell during the past period from 1,000 to 500 applications a day, indicating that migration has fallen sharply over the last months.

In comments to Al-Watan, First Judge Mohammad al-Maarawi said that there were many Syrians who had changed their minds about migrating abroad, especially after hearing what happened to others who migrated to European countries and the poor treatment they met from some of them, in addition to the major difficulties they face during the trip.

Maarawi said that the court was suffering from heavy pressure in issuing permits to minors as a result of the high demand to travel, whereas currently this pressure no longer exists.

He said that the court issued travel permits to minors based on a number of conditions, including the father’s consent in the event that the mother requested the travel permit for her children. The father must attend the court and acknowledges his consent to the travel. He added that if the father is not present, the wife is asked if any one of the minor’s relatives are present from the father’s side, like the grandfather, uncle, or even the grandmother or aunt. If one of these are found, their consent is taken for the minor to travel.

The judge said that if the father has died, then the wife is asked for a death certificate from the civil registry or that it be written in the family file that he has died, and that if it is not recorded in the civil registry then they ask her to bring two witnesses to confirm his death.

Maarawi added: if the father is surrounded in a conflict zone and cannot leave, then two witnesses are required to confirm that they heard the father consent to his children’s travel with their mother, adding that the sharia court strongly emphasizes the implementation of these conditions so that the conditions are not exploited by some in order for minors to travel without their father or one of his relatives knowing.

He said that most of the requests for travel permits for minors come from the mother, and this is because if the father is traveling with them, the minors do not need travel permits.

Media published last week a report that included a large number of non-Syrian migrants posing as Syrians to obtain asylum in European countries, especially to Western European countries such as Germany, France, and Britain, indicating that these people had forged Syrian passports.