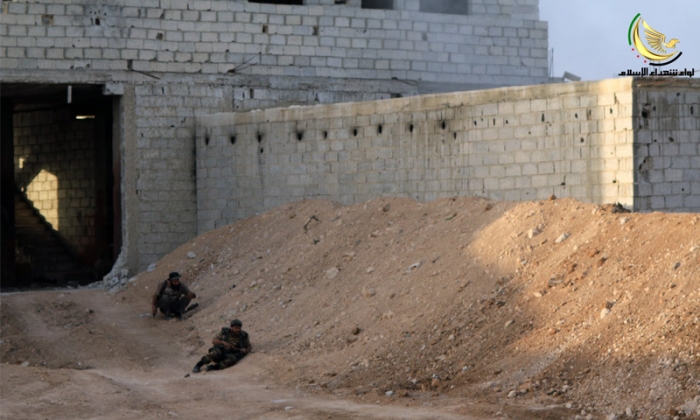 Assad’s forces escalated their air and ground campaign against the city of Daraya in the western suburbs of Damascus on Thursday, June 30, with the city hit by dozens of barrel bombs, mortars and rockets.

Enab Baladi’s correspondent in Daraya said that the clashes were currently ongoing on the city’s outskirts, with the Syrian regime probably taking control of three farms, although this was unconfirmed due to the difficulty of reaching the area.

The local council in the city had counted 42 barrel bombs at the time of writing, while the correspondent said that more than 15 ground-ground missiles had fallen on Daraya since the morning, in addition to more than 250 mortars.

The spokesman for the Martyrs of Islam brigade, Tamam Abou al-Kheir, said that Assad’s forces had tried since the morning to advance on the city’s southwestern front, adding there were deaths among the forces’ lines during battles with the Free Syrian Army.

Abou Kheir did not confirm or deny that a number of the city’s farms had fallen into regime hands.

Assad’s forces have rained hundreds of barrel bombs on the city over the last 10 days, following attempts by FSA factions to open a route to Moadamieh, coinciding with the escalation of the campaign it is waging on the city’s outskirts with the aim of storming the area.