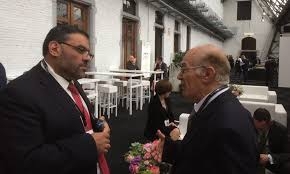 The secretary-general of the Syrian National Coalition has said that comments by Syria’s internal opposition group, the National Coordination Commission, generally “avoid telling the truth, are aimed at deflating certain issues and make haphazard accusations against other opposition bodies.”

Senior Coalition member Abdul Ilah al-Fahd pointed out that the remarks made by the Commission “do not clearly differentiate between the criminal and the victim.”

Fahd stressed that any position that fails to see things as they really are, or fails to stand by what is right, cannot be trusted as it would not be defending the rights of civilians and their just cause. Any such stance, therefore, would be advocating the criminal than the victim, he added.

The opposition figure also warned of the Assad regime’s persistent attempts to storm the town of Daraya, applauding the steadfastness shown by the Syrian people despite the crimes committed against them and sieges to which they have been subjected.

“The crimes committed against civilians in Syria will not go unpunished. Holding perpetrators of these crimes accountable is a duty that cannot be shirked,” Fahd said.