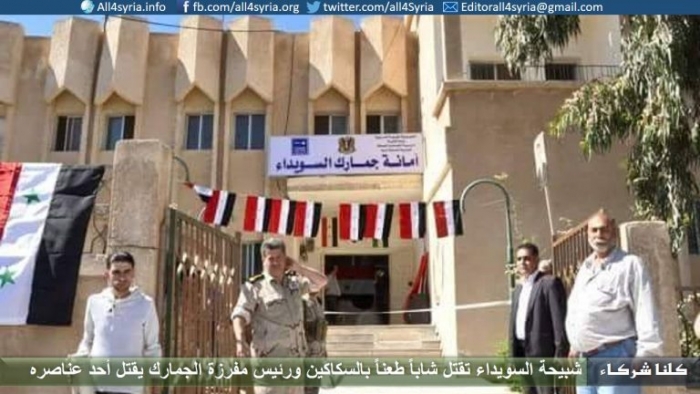 A young man was stabbed to death by pro-regime shabeeha in the city of Suweida on Monday when he tried to prevent the militants from entering a family park, while it was reported that the head of the customs division in Suweida killed one of his men in July for unknown reasons.

The activist Khalid al-Qadmani told All4Syria that the murder occurred in the Al-Wafaa park in the city of Suweida when a young man, Reyan Abou al-Fakhar (a first-year engineering student working in the park during the summer break) blocked a group of regime shabeeha from entering the family park, and was then stabbed to death.

He said that the lawlessness in the province was due to the regime and its security agencies. The criminal who carried out the attack was Alaa Balaan, who belonged to one of the province’s security agencies, and had been imprisoned previously for raping an underage girl. Balaan had been released from prison in exchange for fighting within the regime paramilitary groups.

“The people of Suweida are paying the price of the regime releasing dozens of criminals and thieves every day, to the extent that the province has turned into a jungle ruled over by a number of shabeeha. The behavior of the regime and its security agencies has caused a state of unprecedented tension in the province,” Qadmani said.

Regime loyalist pages reported that the head of the customs division in Suweida killed one of his men. The page Suweida News Live, which is close to the province's security agencies, said that the young man, Fouad Suwaid was killed on July 7 in unclear circumstances.

The source said that investigations had revealed that Maher Abou Diqqa, head of the customs contingent and Mamoun Faraj from the customs secretariat had carried out the killing of Suwaid and that the security agencies in Suweida had arrested the killer and his partner.

On August 1, the residents of the village of Shahba in the Suweida countryside found a corpse near the village, which turned out to be the young man Alaa al-Atrash, who had been kidnapped about a month earlier in front of his home.