The new mechanism will be composed of intelligence services, foreign ministries and militaries of the two parties 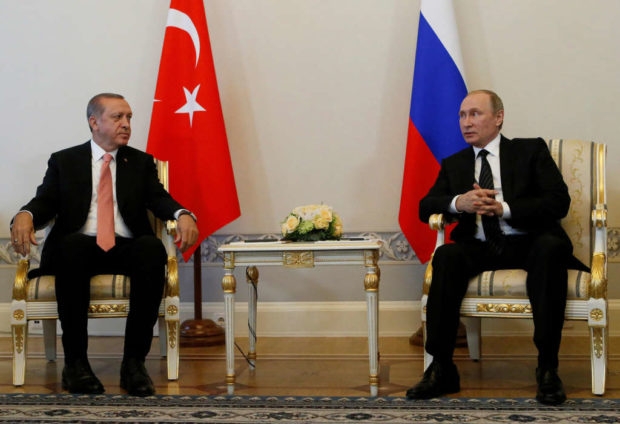 A few hours after the meeting between Russian President Vladimir Putin and his Turkish counterpart Recep Tayyip Erdogan in St. Petersburg on Tuesday, Turkish Foreign Minister Mevlüt Çavuşoğlu announced that his country will establish a strong mechanism along with Russia in order to reach a political solution on Syria.

Çavuşoğlu confirmed the new mechanism will be composed of intelligence services, foreign ministries and militaries of the two parties.

“Turkish National Intelligence Organization (MIT) chief Hakan Fidan and representatives from the Foreign Ministry and Turkish Armed Forces (TSK) will depart for Russia late on Aug. 10 for the meeting in St. Petersburg,” he added.

He said President Vladimir Putin has agreed to lift Russian sanctions against Turkish products and facilitate the work on the TurkStream gas pipeline project, if needed.

Although Turkey and Russia have different views on Syria, they are on the same page regarding the declaration of a cease-fire, providing humanitarian aid and finding a political solution, Çavuşoğlu said.

Apart from the mechanism, the Turkish and Russian chiefs of General Staff have also agreed to establish a direct line of communication in order to avoid a repetition of unwanted incidents over Syria like the downing of the Russian warplane on Nov. 24, 2015.

“We have agreed to be in close contact in order to avoid such incidents. In this frame, our Chief of General Staff and the Russian chief of general staff have re-established a direct line. They are in talks on this,” İbrahim Kalın, the spokesman for Erdoğan said.

Notably, Moscow and Ankara have been backing opposing parties in the five-year Syrian conflict. The Syrian crisis is where their differences are most pronounced.

On the other hand, Çavuşoğlu also underlined that Turkey’s reconciliation with Russia should not be read as a message to the West.

“We are doing it for our interests, for regional interests. We are actually issuing our messages to the West in a clear way,” he said.

“Many of them, European countries, have shown whether they are our true friends or not after the coup attempt.

The future of our ties with EU and Western countries will not have an effect on our future ties with Russia. Or vice versa, he said.

Çavuşoğlu said Turkey had been facing political obstacles from the EU over the last 15 years.

“If the West loses Turkey one day, it will not be because of Turkey’s good ties with Russia, China, Central Asian or Islamic countries but because of the West’s mistakes.”